The Prime Minister recommended that attention be paid to the intellectual as well as physical development of the children.

Sheikh Hasina, the Prime Minister of Bangladesh, has underlined the importance of children and adolescents participating in sports. She said that there are not as many opportunities for sports in the metropolis of Dhaka. The city’s youth are being restricted to apartments across the metropolis. Children who grow up in apartment buildings are beginning to resemble city hens. The best thing for children’s development is for their parents to make it possible for them to play with their hands and feet PM mentioned. 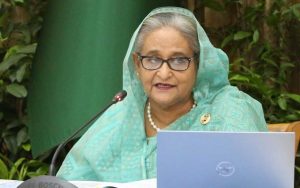 ways laying in bed with electronic devices such as mobile phones, computers, and iPads is not an indication of mental or physical health. Because of this, I strongly encourage parents, guardians, and other adults to take care of the welfare of children.

The Prime Minister emphasised the need for action to be taken in order to revive the rural games. In this sense, we are contributing to the effort. We aim to push the boundaries of our games.

Syeda Ratna conveyed her appreciation to the Prime Minister as she was speaking about the psychological and physiological growth of children and adolescents to the bdreports24. She said to bdreports24 that there is a shortage of space in the city of Dhaka for playing and that the shortage of places for children to play is growing day by day. It is important to give children access to open green spaces like this Kalabagan field in all parts of the city and on the edges, including Dhaka.