The government already has celebrated the success of 10000mw milestone of the country through colorful programme. Addressing in the celebration function has claimed to stand the generation capacity is now10213mw.

The city dwellers have enjoyed a fire show at Hatijheel, which was switched on by Prime Minister Sheikh Hasina from Banghabandu International Conference Centre (BICC), where another function were hold on the occasion. 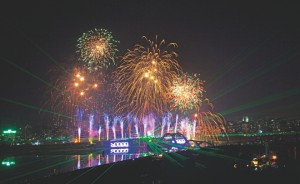 But question is raised over 10000-mw generation capacity while official of Power Development Board (PDB) differed with the figure.

Till now, the country witnessed highest electricity generated 6575mw on 12 July this year.

According to data of Power Development Board (PDB), total power generation capacity of the country is increased 98883mw including 170mw, imported from India that was 4942mw in the end of 2008.

PDB official said, to generate 10000mw electricity is required more two years as 30 per cent electricity could not generate due to lack of proper maintenance. Besides, 10 per cent seat idle for short supply of fuel.

At present the country’s highest power generation capacity is 9600 PDB of which highest 7000mw electricity is in generable condition, PDB official said.

Though the government declared that total electricity generation capacity has crossed 10000mw but reality is different and it is not over 9883mw with the imported 170mw. Moreover many power plants did not started generation but it was included in the figure and some combined fuel cycle power plants are being operating in single cycle but its total capacity has counted in the 10000mw capacity. The combined cycle generation of those power plants is required at least two years; PDB official said wishing not to be named.

Energy Advisor to the Prime Minister Tawfiq-e-Elahi Chowdhury told the reporter in the sideline of ‘Alok Utsob’ at BICC on 12 November, where prime minister was present as chief guest, the existing consumers could not consume more electricity, so “we could not increase power generation”.

He also said that the capacity build up was not enough for increasing power generation, power-substations and transmission line would have to develop to cover more people with the electricity.

But the officials of PDB differed with the comment of Tawfiq Elahi. They again explained that that at present total generation was not possible to cross 7000mw and 10000 mw would possible after next two years.

Energy Advisor earlier claimed in a press briefing that the government had achieved   ‘Golden A’ for the success of power sector.

The per capital power generation was 220 kilowatt in 2009, increasing to 321 kw.  The country’s about 62 per cent people have come under electricity coverage compared with 47 five years ago, the energy adviser said.

Meanwhile, about 73,734 fresh connections for irrigation have been given and 39483 kilometers transmissions have been set up.