On the occasion of the International Day in Support of Victims of Torture, the World Organisation against Torture (OMCT) and its member organization in Bangladesh, Odhikar, demand justice for victims of torture and extra judicial killings.

“Two years ago, Bangladesh passed the Torture and Custodial Death (Prevention) Act 2013; and committed itself to eradicating torture. Yet torture and impunity remain widespread in Bangladesh. No serious efforts have been made to give effect to the said Act or the UN 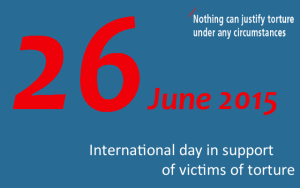 Convention against Torture. Hundreds of victims of torture and their families are awaiting justice” says Adilur Rahman Khan, Secretary of Odhikar

Today on June 26, 2015 we want to commemorate and pay tribute to the numerous victims of torture and their families, some of which are named below:

These victims, their families, as well as many, many other torture victims are awaiting independent investigations and rehabilitation, as per the CAT and the Act of 2013. On the day dedicated to torture victims, Odhikar and the OMCT urge Bangladesh to take effective steps to effectively implement the landmark Convention against Torture and the Torture and Custodial Death (Prevention) Act.

“17 years ago, Bangladesh ratified the Convention against Torture and promised to prevent torture, to condemn any act of torture and to meet the needs of victims. It is time that Bangladesh steps up to its obligations and develops an action plan that includes the submission of the very first state report to the Committee against Torture” says Gerald Staberock, Secretary General of the OMCT.

Every year, Odhikar conducts a series of events, including rallies and public awareness events in several districts to commemorate this international day condemning torture and ill treatment and remembering the victims. The events are part of OMCT’s global campaign entitled ‘nothing can justify torture under any circumstances’.