Dhaka is ranked as one of the least liveable cities in the world, according to the Economist Intelligence Unit. Similarly, foreign visitors are sometimes left aghast at how, in Malthusian terms, the capital of Bangladesh manages to survive. Yet this host city for the upcoming T20 Cricket World Cup has, some would say, not only survived but prospered in recent years.

“If you brought a property in Dhanmondi [one of the most affluent residential areas in Dhaka] for 6.45m taka [$83,000] in 2005, that would have increased five or six times by now,” says Kazi Inam Ahmed, owner of GemconCity, a new estate agency. 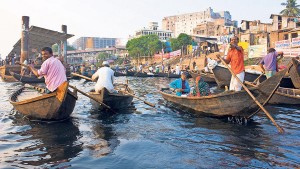 In fact, Goldman Sachs has placed Bangladesh in the “next 11’” category after the Bric countries and its “Mint” (Mexico, Indonesia, Nigeria and Turkey) group as an emerging economy. Furthermore, from out of its bewildering, densely packed capital, properties are now starting to emerge that can match such aspirations.

In the north of the city, modern blocks that would not look out of place in Hong Kong or Singapore surge upwards from 1980s-era family houses, long considered obsolete, where residents were once able to have gardens.

In Navana Karatoya, an apartment block in the upmarket Baridarah area, Muhammad Miah, a plumber, installs a remote-controlled toilet in a property overlooking GulshanLake and a neighbouring entrepreneur’s answer to heavy traffic – a private helipad. Miah says he regularly installs such fixtures when he installs the plumbing in these kinds of blocks, which are often home to foreign embassy staff and some of the country’s roughly 45,000 dollar millionaires. Navana Karatoya’s 3,500 sq ft apartments are worth more than $1.5m each.

Flats in properties such as Karatoya and the nearby Mid Summer Dream block sell for about $440 per sq ft through Navana Real Estate. These are just some of a growing number of $1m-plus properties. When Midsummer Dream’s apartments went on sale in 2009, the rate was 19,000 taka per sq ft, but that valuation has now rocketed to 35,000 taka per sq ft.

This corner of north Dhaka was not long ago bordered by rice paddy fields. But what once was a provincial centre of 1m people in 1971, when the country gained independence, is now home to about 15m, and continues to grow by 500,000 inhabitants every year. “In four decades, Dhaka has, on average, grown close to 5 per cent a year,” says Nurul Islam, an urban planner with the Dhaka-based Centre for Urban Studies research institute. “In a property where one family would have lived in 10 years ago, we now we have 40.”

Few Bangladeshis can afford Dhaka apartments. According to Fawaz Rob, an architect who teaches at the city’s NorthSouthUniversity, investing in property is risky because the high-end market is prone to fluctuations and liable to wobble when there is political instability. Investors with assets use property as a means to launder “black money”, he adds.

The city’s population outgrew the existing infrastructure many years ago. Private buses ply the roads with little or no plan or route. The chaos and overcrowded streets push car ownership higher, compounding the problem. When one considers that areas of central Dhaka have a population density of about 135,000 people per sq km, a lack of public transport becomes a confounding issue. Three-wheeled, cycle-powered rickshaws pick up much of the slack.

Still, in the near future the city could be served by a new mass transit rail system that would slash journey times, after the government agreed plans for a line to intersect the city from north to south, costing $2.8bn.

The relentless traffic does raise the question of which neighbourhood to live in. Gulshan and neighbouring suburbs of Banani and Baridhara, known by some as the “tri-state” (or the “green zone”), are home to diplomats and the well-heeled. In the north of the city, they are convenient for the airport and, crucially for those doing business in the city, for the industrial satellite towns where much of the world’s clothing is made. Additionally, many multinationals have set up in the area including Walmart and electronics group Samsung.

The Gulshan area has a profusion of international restaurants, while the more central neighbourhood of Dhanmondi is more culturally vibrant, with art galleries and one of Asia’s leading photography schools. Developers have latched on to this and Gemcon City Real Estate’s Shanchita block is a good example of recent developments. Its standard properties have three bedrooms, a maid’s room, basement parking and a small garden space. The Shanchita is rare in Dhaka in that the property has a ground-floor studio apartment. Properties in the 10-storey Shanchita sell for about £250,000.

The super-wealthy, generally, prefer to live in Gulshan or Baridarah. A new generation of buildings is springing up that reflect changing tastes and styles. The limited space has challenged architects to be creative with light and greenery. Navana and Shanta real estate are pioneering the use of alternative materials such as weather-resistant, “fair face concrete”, reflecting lessons learnt during the city’s monsoons. Greater use of balcony gardens provides greater light and green space for residents.

Many new upmarket properties are making enterprising use of the only space left – roofs. This means that wealthy buyers can have pools and enjoy fine views across leafy Gulshan.

Navana’s Platinum Residence apartments, one of its highest-end properties, features a large rooftop pool, hot tub and gym, high above the rat race in a quiet corner of north Gulshan. Platinum Residence was developed by Navana, and is home to the company’s owner. With the flats benefiting from more than 4,000 sq ft of living space, they are, perhaps understandably, hard to come by.