The Unnayan Onneshan called for prudent management of the economy as the economic growth in the current fiscal year is likely to experience a decelerating rate for the third time in a row from those of the preceding years.

The Unnayan Onneshan cautions in its pre-national budget publication,  “Dealing with Deceleration: State of Bangladesh Economy and Development 2013-14” that the management of an economy is contingent upon the efficacy of macroeconomic policies in preventing fluctuations in output and employment and if the current expedient regimes continue the deceleration could not be averted.

The current annual number, which has scrutinised the major macroeconomic indicators of growth and development, finds that short-sightedness in fiscal management and inappropriate contractionary monetary policies led to stagnation in investment, causing disarrays and weak performance in the real economy, including agriculture, manufacturing and external sector. 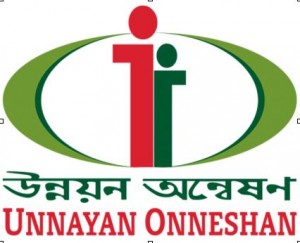 The research organisation also points out that there has been decelerated decline in the incidence of poverty, coupled with increased number of unemployed, particularly youth and educated and decreasing allocation of budget and poor status of ADP implementation in the social sectors.

The Unnayan Onneshan also observes an increasing gap between the target and the achievement of revenue collection in the FY 2013-14, indicating a squeezed capacity of the government to invest in much needed infrastructure.

Against the backdrop of increasing gap between the target and the actual collection of revenue, the government has experienced a deficit of Tk. 7968 crore, of which Tk. 5579 crore taka in income tax vis-à-vis the target set by the National Board of Revenue (NBR) during the period of July-March of the FY 2013-14, thereby indicating a larger deficit at the end of the fiscal year. In the FY 2012-13, the target of tax revenue collection was Tk. 116824 crore against the actual collection of Tk. 112746.3 crore.

In order to get rid of the outlined bottlenecks in the economy, the Unnayan Onneshan calls for a strategy that generates increment in the productive capacity and provides avenues for the poor to obtain an increased share.