Participants at the DITF received only Tk 804 million worth export orders this year against Tk 1.57 billion last year.

However, speakers at the concluding ceremony of the fair Monday expressed their hope that gradual improvement of political situation would help boost export of local products along with foreign direct investment in the country, reports the Financial Express. 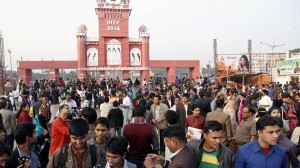 They also emphasised on exploration of regional markets to give a big boost to the export of domestic products.

“We have largely become dependent on some selected markets like European region and the United States of America which is risky for sustainable development,” president of the Bangladesh Chambers of Commerce and Industry (FBCCI) Kazi Akram Uddin Ahmed said.

“For a sustainable export growth local producers should utilise the prospects of Asian region. China, India, South Korea, Japan and some other countries have allowed our exporters to export at a zero duty which we should capitalise to boost export and to reduce reliance on the few markets,” he added.

The FBCCI president also stressed the need for exploring new markets, while urging the government to designate a permanent venue for the fair.

Commerce Minister Tofail Ahmed said the country has the potential to achieve export worth US$ 50.0 billion goods within the next five years if local entrepreneurs gradually try to upgrade quality of their products and try to find out new export destinations.

“Present trend of export growth says that the local producers have the capability to earn $50 billion from their export if they continuously try to find out new export markets along with upgrading quality of their goods,” he added.

“It is the time to separate economy from politics for the greater interest of the nation. I earnestly request all political parties to think about the issue,” the commerce minister said.

However, the main organiser, Export Promotion Bureau (EPB) has honoured 47 participants in twelve categories for their contribution in the DITF.

Besides, EPB also honoured 24 service providing organisations for their excellent services during the fair.

Secretary of the Ministry of Commerce, Mahboob Hossain, vice-chairman of Export Promotion Bureau (EPB), Suvashis Bosh spoke, among others, at the concluding ceremony of DITF.