If you’re on Facebook, a new video about your life went live online Tuesday.

With the help of an automated tool, Facebook has created short, personalized video highlights for “hundreds of millions” of its users. The 62-second clip notes the year you joined Facebook, then shows a handful of your most-liked posts and a seemingly random selection of your photos — all set to instrumental music. 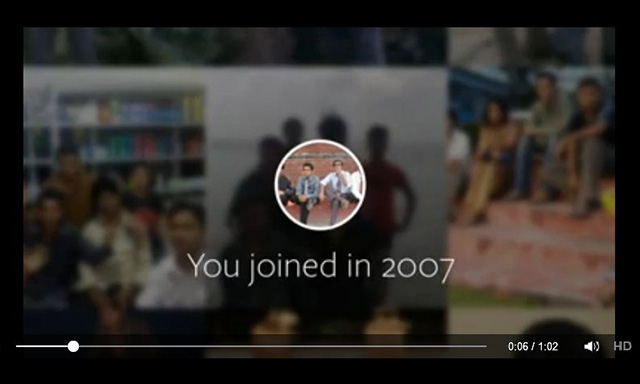 To see yours, go to Facebook/lookback and admire, or cringe.

Facebook posted the clips, titled “A Look Back,” without fanfare Tuesday to commemorate the 10th anniversary of the social network, which was founded by Mark Zuckerberg and four classmates at Harvard University on February 4, 2004.

“People often ask if I always knew that Facebook would become what it is today. No way,” wrote Zuckerberg, the company’s CEO, in a Facebook post Tuesday.

“I remember getting pizza with my friends one night in college shortly after opening Facebook. I told them I was excited to help connect our school community, but one day someone needed to connect the whole world.”

The videos are available to everyone who uses Facebook in English, Spanish, Italian, German, French, Turkish, Indonesian and Brazilian Portuguese, a Facebook spokesperson told CNN.

Depending on how much content you have shared and how long you have been on Facebook, you will either see the personalized video, a collection of photos or a simple thank-you card, the spokesperson said.

Facebook said users will be able to share the video on their pages after 12 noon ET on Tuesday. The videos will only be available for about a month unless you share them on your Timeline. Only you will be able to view your video if you don’t share it.

If the clip contains posts you’d prefer to keep private, you can edit them via an “Edit Your Movie” button, the spokesperson said.

“It’s been amazing to see how all of you have used our tools to build a real community. You’ve shared the happy moments and the painful ones,” Zuckerberg said.

Facebook has created personalized slideshows for users, but this project marks the first time the company has made customized videos. A small team at Facebook spent the last few months crafting the videos and ensuring the company had the resources to render them for most of the network’s 1.2 billion users.