As thousands of Bangladeshis and Indians celebrated the end of one of the world’s most intractable border disputes, Fatema Khatun was quietly hopeful of finally seeing justice.

Fifteen years after Khatun’s husband, Badshah Mia, was hacked to death and his body dumped on a canal bank near their home along the border, no one has been charged with his murder, reports AFP. 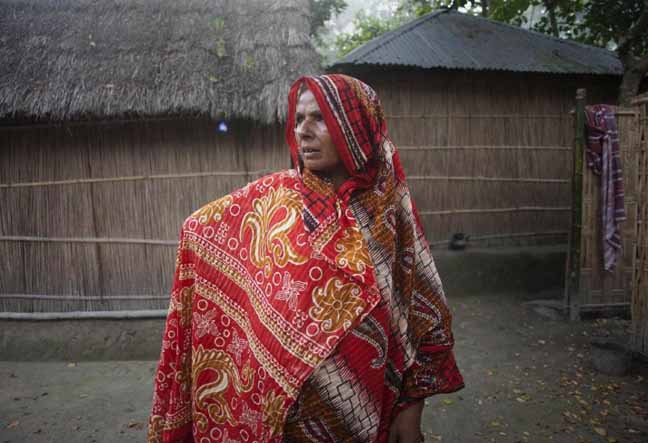 along their frontier—sparking wild celebrations—means the case will at last be investigated.

“There were 15 to 20 attackers… they hacked him repeatedly, cutting open his skull,” the 45-year-old said, wiping away tears.

When the attack occurred, Khatun lived in what was then the enclave of Dahala-Khagrabari, a small island of Indian land locked inside Bangladesh.

The case fell under India’s jurisdiction. But it has always been too difficult for Indian police to gain permission to cross the border into Bangladesh to investigate.

For almost 70 years, some 50,000 residents like Khatun living in a string of enclaves struggled in stateless limbo, cut off from their national governments and unable to access vital services like hospitals, schools and police.

The isolation meant criminals acted largely with impunity, resulting in scores of grisly murders, rapes and looting, while precious farmland was grabbed from villagers by more powerful ones, without recourse.

In Dahala-Khagrabari, home to 7,500 people, at least a dozen murders were committed in the last 30 years, but no one was punished, Rabbul Alam, head of the enclave’s citizens committee, told AFP.

In one day alone, in Lothamari enclave, 13 people were slaughtered with no prosecutions.

“I still remember that day. Hundreds of villagers attacked a group of men who grabbed a piece of land illegally. They killed them one after another and then dumped their bodies in a well,” Lothamari villager Jashiar Rahman Dulal said.

Minority Hindus living in the 111 Indian enclaves in Bangladesh bore the brunt of attacks from their Muslim-majority neighbours, according to locals.

The territories also became a magnet for smugglers and other criminals who fled inside the enclaves on both sides of the border to hide and escape arrest, locals said.

With no police presence, local residents tried to hand down their own form of justice, by electing committees to resolve disputes and dole out fines for minor offences.

But with no way of enforcing the punishments, they were often ignored. Johura Bewa says attackers gouged out her husband’s eyes and left him dead some 40 years ago, as he was guarding his cattle in Dashiar Chhara enclave.

She says the local committee ordered the main suspect, an influential villager, to donate a piece of farmland to Bewa as compensation, but she never received it.

“I became a pauper after the murder. I had to struggle hard to provide food for my four children,” Bewa said, adding that she now hoped to see justice before she died.

The enclaves dated back to ownership arrangements made centuries ago between local princes. The parcels of land survived partition of the subcontinent in 1947 after British rule, and Bangladesh’s 1971 war of independence with Pakistan.

Bangladesh endorsed a deal with India in 1974 in a bid to dissolve the pockets, but India only signed a final agreement in June when Prime Minister Narendra Modi visited Dhaka.

Agreement had stalled because of domestic opposition in parts of India where anti-Bangladesh sentiment runs high, but Modi’s strong electoral mandate allowed him to push a deal through parliament.

On August 1, the 162 enclaves — 111 in Bangladesh and 51 in India—were officially nonexistent and the territories handed over to the nations that surround them.

Both governments have since unveiled plans to build roads, schools and clinics for their new territories.

Khatun’s son, Bulbul Islam, said he planned to file a case at a nearby police station over his father’s murder in Dahala-Khagrabari, which is now part of Bangladesh.

“Most of the people who killed my father are now dead. The two men who led the attack on my father were themselves murdered by other people. But still we want justice,” Islam told AFP.

Bangladesh laws permit investigations even decades after crimes are committed. But local authorities are not sure whether they can probe the murders and other crimes that, at the time, took place in India.

“If any families lodge any complaints, we’ll consider them only in the light of the country’s laws,” local police superintendent Tobarak Ullah told AFP.

“But at least the enclave people should be delighted that those days of lawlessness are now over.”