President of the Federation of Bangladesh Chambers of Commerce and Industry (FBCCI), Kazi Akram Uddin Ahmed said, the political parties should come forward immediately to solve the ongoing political turmoil that is hampering the normalcy in the country,”

He reiterated the appeal to the political parties to come to a settlement as the country’s trade, commerce and the lives of the common people were being held hostage to the prolonged crisis over election administration.

“The politicians of both the major parties sat together after the initiatives taken by the United Nations (UN). Two months ago, we, the business community, had called upon them for sitting together to solve the ongoing crisis.” he said at a press briefing held at the FBCCI office in the capital on Wednesday. 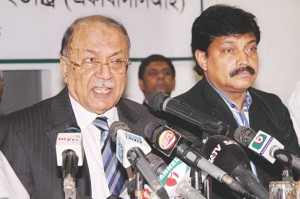 The country’s apex trade body FBCCI arranged the press briefing on the occasion of a ‘Protest Chain’ hoisting white flag of the business community to protest the prevailing political turmoil.

The FBCCI president said in the name of hartal and blockade, the blockaders are paralyzing the country by setting public transport to fire and removing slippers from rail tracks.

He also said the country’s RMG sector has become the worst victim of hartals and blockades as apparel export is being hampered severely, showing a gloomy outlook for the highest foreign exchange earning sector.

Ahead of the Christmas, when the RMG sector bags huge amount of foreign exchange from exports, the country is going through an uncertainty, he said,

Businesses call adding that the sector would not be able to recover the loss very soon.