The Asian Legal Resource Centre (ALRC) has brought matters related to the freedom of expression and opinion, the freedom of peaceful assembly, and the freedom of human rights activism in Bangladesh to the notice of the UN Human Rights Council. The government of Bangladesh has clamped down on these fundamental freedoms to silence dissent in the country. As a member of the 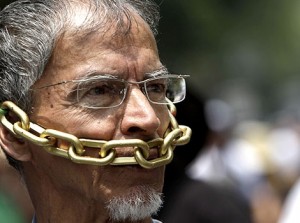 Human Rights Council, Bangladesh is undermining universal human rights at home against its own people and is pretending to be a promoter of rights at international forums such as the Council.

In previous submissions, the ALRC has informed the Council that the Bangladesh government has banned three private television channels, namely: Channel One, Diganta TV, and Islamic TV. The government instantly shut down these TV channels. Diganta TV and Islamic TV were shut, in the early morning, 6 March 2013, for broadcasting the crackdown of law-enforcement agencies against demonstrators at Motijheel in Dhaka. The government also shut the Daily Amardesh, a pro-opposition national daily newspaper on 12 April 2013. The Editor of the daily Mr. Mahmudur Rahman was then detained in fabricated cases. He has been detained for 20 months now without a lawful reason, and without any fair legal redress.

On 7 January 2015, the government arbitrarily arrested Mr. Abdus Salam, Chairman of the Ekushey Television (ETV) – a private TV channel, for broadcasting the speech of an exiled opposition leader. The police stopped Salam’s car in the car park of his office building early in the morning on 7th January. A police officer forcibly entered the car; sat next to the driver’s seat; and forced the driver to drive the car to the Detective Branch (DB) Police Office in Dhaka.

After taking Mr. Salam in custody, without showing any lawful reason, the police claimed that he was arrested in a “pornography” case, which had been filed several months earlier. According to information received, the complainant in the case did not make any allegation against Mr. Salam. He was taken in police remand for five days. Later, the police filed another case against Salam, charging him with sedition. The police allegedly forced him to “confess” to the “sedition charge” for broadcasting the speech of opposition political leader Mr. Tareque Rahman, Senior Vice Chairman of the Bangladesh Nationalist Party who is exiled in UK for several years now. The government has forced the cable operating companies to stop broadcasting the channel. Now, ETV is only available as an Internet-based channel.

The government has also shut down a television talk show titled “Frontline” that used to appear on Bangla Vision TV. The participants of the talk show used to discuss the socio-economic and political affairs of the country. The government routinely communicates with private TV channels, about who should be removed from talk shows and interview rosters, and about anchors that should be included for certain programmes. In order to silence the critical voices in Bangladesh, the government uses the intelligence agencies to intimidate owners and journalists.

Besides the agencies, high-ranking political portfolios like the Prime Minister and Information Minister also crack down on dissent. For example, the Information Minister Mr. Hasanul Haque Inu invited the owners of private TV channels on 22 January. A total of five ministers instructed the television channel owners to show the “correct picture” of Bangladesh. Earlier, in 2014, the government adopted a controversial “national broadcasting policy” allegedly to curtail press freedom and freedom of expression and opinion.

On 11 February 2015, Bangladesh’s Prime Minister Sheikh Hasina stated the following in Parliament: “… I have given the TV channels. There was no private TV channel in Bangladesh before 1996 until I became the Prime Minister. And now, the talk-show-speakers are sitting there to incite people against me; they incite violence in the country. Whoever is doing that the government will monitor it and will take appropriate action against them….”

Expressing views through social networking sites is also dangerous in Bangladesh. About a dozen people have been arrested in recent months for commenting critically about Prime Minister Sheikh Hasina and her son Sajib Wazed Joy on a Facebook page. People have been imprisoned and detained in prison for writing comments or in status updates on Facebook pages. The government has also blocked communication applications like Viber, Line, Tango, and WhatsApp since 21 January 2015. The Bangladesh Telecommunications Regulatory Commission (BTRC) has claimed that the opposition was used these communications applications and that blocking them is necessary to prevent crime. The BTRC has also said that they closed down the applications following instructions from the intelligence agencies and the Ministry of Home Affairs.

As a result of the entrenched forms of repression in Bangladesh, it is difficult and dangerous for the independent press to survive. Critical voices cannot grow due to state harassments through acts of intimidation and the fabrication of sedition charges under cyber crimes legislations.

Freedom of peaceful assembly and association is virtually banned in Bangladesh. The ruling party and its allies are only allowed to hold meetings in public in the country. Since 27 December 2014, the government has been disallowing all programmes announced by the opposition. On 5 January 2015, when the opposition announced its planned meeting to mark the anniversary of the “fake” general election the police banned rallies in Dhaka.

The police, in fact, do not allow any groups who are not associated with the government to hold meetings in public anywhere in the country, despite having lifted the formal ban on such meetings on 16 January. This is happening at a time when the people of Bangladesh question the legitimacy of the current government, which did not allow the citizens to vote on 5 January 2014. The opposition is demanding fair, credible, and inclusive election for all parties immediately, to continue democratic governance in the country. However, the government, which bagged 154 seats unopposed out of 300 constituencies of the National Parliament—as all opposition parties boycotted the election last year— rejects such demands since they renewed their power.

The ALRC urges the Human Rights Council to comprehend the roots of the problem in Bangladesh, where a flawed election system has allowed undeserving parties to grab power. In the absence of credible and functional rule of law institutions, the ruling elites remain in the driving seat, manipulating every institution, including all branches of the Judiciary. The Bangladesh Judiciary and all the institutions of the State comply with the rulers to maintain and enhance their political masters’ power.

The Council should create a country mandate to report back to the UN for taking further necessary steps, as required, for the protection of the lives, liberties and livelihood of the people. The Council should ascertain authentic information about the ground reality and the international community should intervene in Bangladesh before more lives and voices are lost.