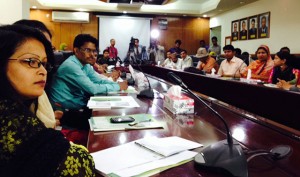 Since availability of competitive labour continually persist; Bangladesh can earn around $1 billion in exports per year from IT freelance services within the next decade,industry people said.

“We have immense potential in outsourcing mainly due to growing popularity of IT services and a large population base,” said Zakaria Swapan, founder and chief executive of Priyo.com.

The global market for freelance services is now hovering around $100 billion a year, he said.

The country will be able to grab at least 1 percent of the global freelance market within the next decade if the government provides necessary policy support, he said at a seminar on “entrepreneurship development through outsourcing” organised by SME Foundation at its office in Dhaka yesterday.

Freelance refers to a type of job where the worker is self-employed. A freelancer works for themselves and bids for temporary jobs and projects with one or more employers.

The amount of money freelancers earn from abroad each year is tough to measure as their incomes are not included in the software export data, Swapan said.

The country has around 200,000 freelancers at present working from their homes for different global companies, said Zunaid Ahmed Palak, state minister for posts, telecommunications and information technology.

The government has also undertaken a project to create another 50,000 freelancers by providing necessary training, he said.

The minister said the government has brought 197 upazilas so far under fibre optic connectivity in a bid to provide high speed internet in rural areas; it plans to cover all the upazilas by 2015.

About 24 percent of the population uses the internet in Bangladesh, which was a mere 6 percent five years ago, he added.

Bangladesh now exports IT and IT-enabled services worth around $200 million a year, which was only $23 million in 2009, according to Palak.
Countries that hire freelancers from Bangladesh include the US, Canada, the UK, Australia and Singapore.

Bangladesh is competing with India, Pakistan and some East European nations for freelance work, which definitely speaks volumes about the high calibre of Bangladeshi IT professionals.

At the event, Mustafa Jabbar, a former president of Bangladesh Computer Samity, the national association of ICT companies, called upon the government to focus on overall development of the IT sector and refrain from focusing on just outsourcing or freelancing.