The government has extended its procurement target of Aman rice by 50% this year to meet shortages in food reserves.

It also plans to start open market sale (OMS) for rice and wheat flour from March 2 until boro harvest in June. 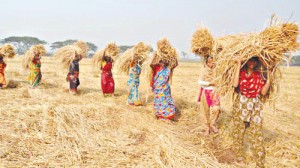 The country’s food grain reserves currently stand at about 969,000 tonnes, which is 272,000 tonnes less than for the same period last year.

On November 27, the government announced it would procure 200,000 tonnes of Aman rice at Tk30 per kg from the local market this season, between December 1 and February 28.

“The procurement target has increased to 300,000 tonnes, which will be collected within the previously declared timeframe,” said Md Moinul Haque, additional director general of the Directorate of Food.

As of yesterday, the government already procured 233,000 tonnes of Aman.

However, millers contracted by the government said there was a shortage of coarse rice in the market as Aman harvesting ended a month and a half ago.

A food directorate official said the government could achieve the new target as it had already signed deals with suppliers for 291,000 tonnes.

“Most of the millers who have already signed contracts with the government will provide their stocks despite incurring losses to avoid being removed from the government’s list of suppliers,” said Nirod Baran Saha, president of Naogaon Rice Wholesalers Association.

As per official data, the production cost per kg rice is Tk25.42, but millers say the actual cost is about Tk33 per kg, which is Tk3 more than the government’s procurement rate.

Some millers had already had their licences cancelled, while the rest had been supplying the government with cheaper imports from India, Nirod said.

Quazi Shahabuddin, former director general of the Bangladesh Institute of Development Studies, said the government decision would increase food reserves. In regards to the possible financial losses facing millers, he said they always manage to make a profit in any situation.

The rice and flour OMS from March 2 would cover all district towns, except those in Rajshahi and Rangpur where only wheat would be provided until the Aman procurement was complete, Moinul Haque told the Dhaka Tribune.

The price of OMS rice has been fixed at Tk24 per kg and wheat at Tk20.

The government usually starts OMS of food essentials in all major towns and cities to the pressure on low-income groups.