In line with the previous years, traditional boat race was held on Rupsha River in Khulna amid much festivities and enthusiasm on October 29. Nagar Samajik o Sanskritik Kendra (NSSK), Khulna arranged the boat race with the patronization of Grameenphone (GP). Over one hundred thousand people attended the 11th edition of the traditional boat race. It was the third time Grameenphone sponsored the festival.

The boat race has already turned into a meeting and greeting place for the people of this region. This trend has been continuing for the last 11 years. Centering on the boat race, a colorful rally 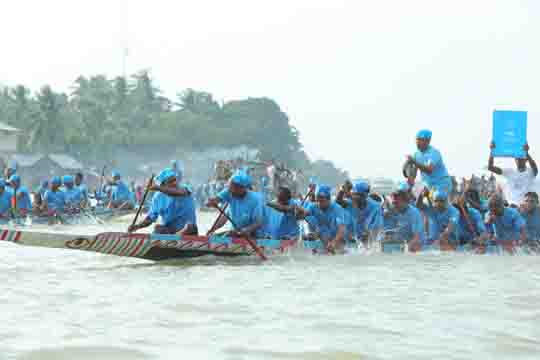 was also arranged in the port and industrial city. The boat race was officially inaugurated at 2pm at 1 Customs Ghaat, and it ended at 5:30pm.

President of NSSK, Mollah Maruf Rashid said, “We have working for a long time with the slogan that ‘If the rivers live, the country will live’. That is why we have been arranging this traditional boat race for the last 11 years. The spontaneous response of the people of Khulna inspires us to arrange this race every year.”

Prizes were handed over to the winners at the prize giving ceremony held at Rupsha Ghaat. The ceremony was followed by a cultural program. Singer Kornia, Khulna’s Khude Gaanraj Ratul, and other local performers participated in the event.

NSSK and Grameenphone express their heartfelt gratitude to these organizations for the helping in the successful completion of the event.

Grameenphone, part of the Telenor Group, is a leading telecommunications service provider in Bangladesh with more than 55 million subscribers. Since its inception in 1997, Grameenphone has built the largest cellular network in the country, covering nearly 99 percent of the country’s population. With its brand promise to enable customers to “Go beyond”, Grameenphone seeks to help customers get the full benefit of mobile data and voice services and provide Internet For All. Grameenphone is listed on the Dhaka Stock Exchange.