Bangladesh’s economy has maintained a healthy 6%-plus growth rate in past decade, despite global shocks. The country now needs to accelerate GDP growth to over 8% as well as maintain the present remittance growth to become a middle-income country by 2021, according to the editorial of the current ICCB News Bulletin (July-September 2014 issue) of International Chamber of Commerce-Bangladesh released today. 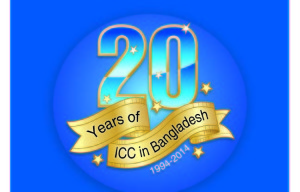 In the budget of current fiscal, the government has set 7.3% growth target. To achieve the target, according to ADB, the total investment should be around 34.3 % from the present level of 28.7 per cent of GDP. The Bank blamed lower than expected level of investment as principal reason for growth deficit in Bangladesh.

There is no denying the fact that FDI inflow into the country has been increasing for the last several years. It stood at US$1.73 billion in FY 2013, registering a 45% growth over US$1.19 billion a year ago. According to the Board of Investment (BoI) data, the United Kingdom topped the list of FDI inflow in Bangladesh followed by Malaysia, Singapore, South Korea and USA in 2013. But analysts believe that most of these FDIs are for expansion of existing industries.

FDI still constitutes a low share of 1.2 per cent of GDP in 2013 as against 1.3 per cent in 2012, which is considered to be much lower compared to other countries, such as Myanmar, Laos, Cambodia and Vietnam.

Bangladesh has the potential to attract significantly higher levels of FDI by positioning itself as a competitive center for labor intensive garments and footwear manufacturing as well as having a favorable location between the two large and dynamic economies, China and India. Preferential access to key consumer markets in developed countries also makes it an attractive place for relocation of export oriented industries.

In order to attract FDIs, experts stressed the necessity of bringing all the services under one umbrella to ensure hassle-free investment atmosphere and provide one stop service in its true sense. At present, getting permission for any foreign investment-related project is very cumbersome. Investors need to move several ministries and government departments to obtain permission or licenses before making their investments

BoI, being the apex private investment promotion agency, should formulate an Investment Policy to attract more FDI. Analysts say foreign investment would flow in to the country if BoI could assure the investors about two things — land and primary energy like power and gas. There are vast amounts of government land which remained abandoned for long. The Privatization Commission took a number of measures to use those, but could not make any significant achievement because of some inter-ministerial problems.

Besides, BoI needs to strengthen its human resources, develop its own basic core staff and arrange necessary training to provide better and prompt services prospective investors. Despite having very liberal legal framework, analysts stressed the need for removal of security concerns, further liberalization of trade-related policies and resolution of the problem of political uncertainty to attract FDIs.

In order to achieve higher growth trajectory, Bangladesh has to attract FDIs to address infrastructure deficit, productivity gap and diversification of export base as well as transparent and timely decision-making and ensuring stricter enforcement of government commitments.