A top official of the International Labour Organization (ILO) on Thursday expressed displeasure over the slow progress in compensating the Rana Plaza victims saying it will be a ‘shame’ for all the stakeholders. 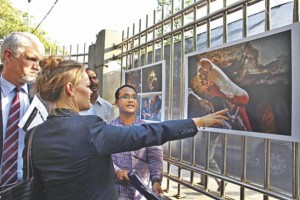 He was speaking at a function, titled ‘One Year after Rana Plaza: Progress and the way Forward’, at Ruposhi Bangla Hotel in the city, reports UNB.

Looking back at the past year, Gilbert Houngbo said he was encouraged by what had been achieved and stressed the importance of keeping up the momentum to deliver on all aspects of the National Tripartite Plan of Action (NTPA).

“Much has been done. Now the factory inspections must be completed, compensation claims processed and the labour law implemented in full,” he said.

“Training for new unions and employers is essential so that a better future for the RMG sector can be built on social dialogue,” he said adding, “we also need to think ahead in terms of preparedness through a workplace injury insurance scheme for example.”

William Hanna said today’s reports (media) remind them of the continued suffering of many victims one year later. “We call for rapid and full compensation of the victims and a coordinated approach in this area,” he said.

Sharing his experience, Hanna said, “The pictures we’ve seen in the photo exhibitions here in Dhaka bring back that terrible day, and the sufferings of the victims.”

British High Commissioner Gibson said, “Let’s use this anniversary to maintain the momentum and push for further progress. We must ensure that commitments made translate into real changes.”

The government has so far spent Tk 23.55 crore on the victims of Rana Plaza collapse from the Prime Minister’s Relief Fund since the worst-ever industrial tragedy of the country occurred exactly a year ago.

Different organisations and companies from home and abroad have donated Tk 127 crore to the fund for the restitution of the victims.