Bangladesh has developed a model of community group formation and skill development training regarding improved poultry husbandry practices. Having micro-credit, it aims at helping the rural poor to improve their livelihood, income generation and empowerment. 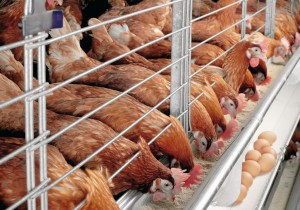 Under the Companies Act, 1994, there has been a provision to carry business like layer farm, pullet raising farm, broiler farm and parent stock farm, establishment of poultry hatchery, egg processing and broiler processing.

Evidently the commercial poultry industry has grown with great potentialities.

Estimates show that poultry population is increasing at the rate of 6.5 per cent per year in the country. The sector is growing maybe because fishes are declining. The people are switching to poultry as a source of animal protein and due to availability of vaccines that reduces the mortality rate of chicks.

According to a census completed by the Department of Livestock Services (DLS) and the Poultry Sector Development Project (PSDP), there are approximately 38,000 commercial poultry farms housing 124,10,000 layers and 107,84,5000 broilers in Bangladesh.

Like other small and medium enterprises, the poultry industry has become a source of livelihood of 5.2 million people. Its size may increase five-fold in the coming years. There are about 112,000 farms, 136 hatcheries and breeder farms, 32 automatic mechanised feed mills, 45 small and medium feed mills and more than 100 medicine companies in operation in Bangladesh having employment of several hundreds of thousands of people.

Started from commercially 1969, the growth of poultry has been fastest since 1990s though this industry was absolutely commercialised in 1980s. Now 100 per cent domestic demand of poultry is met by this industry. It was declared an agro-based industry in 1994 under the Companies Act and tax on land used for production was reduced to the rate being enjoyed by agro-based industries. Poultry farms were exempted from income tax until the year 2005. Letter of credit (L/C) margin was reduced and made flexible for this industry along with 20 per cent rebate on electricity. All these initiatives are encouraging but still the industry has been lagging behind in terms of availability of direct government facilities.

The industry has great potentialities. It could create huge employment opportunities in the country. The industry has better business prospects considering the level of consumption of poultry meat. The opportunities for exporting meat to other countries are there. The consumption of meat in developing countries grew by 70 MMT (million metric tons) from 26 MMT during the last five years. After meeting domestic demand, there has been an ample opportunity to export poultry products outside the country and could earn a lot of foreign exchange. Our poultry industry has the potentials to earn foreign currencies from India, Pakistan, Nepal, Malaysia, Indonesia, and countries of the Middle East. So we should make efforts to export poultry to foreign countries as early as possible.

When it is time to develop the industry and to capture the big foreign markets, the sad news is that the industry is facing awkward situation. The farmers are incurring losses from the business. Many shut down their businesses losing all their capital. Estimate shows that the country’s poultry industry has suffered losses of more than Tk 40 billion and the breeders’  losses stand at around Tk 3.82 billion in last three months of last year because of political turmoil. Around 30 per cent of farms were also closed during the period and the rest are sinking in debts. The Bangladesh Poultry Industries Association recently held a press conference and expressed its grievance over the present business environment. Other industries associated with the poultry industry are also suffering from tremendous losses. According to the Feed Industries Association Bangladesh (FIAB), the farms incurred Tk 10 billion loss.

The government should take immediate steps like rescheduling bank loans of the poultry farms, waiver of interest, providing financial support, etc to reopen the closed-down farms. It should introduce stimulus package to protect marginal poultry farmers who suffered most.

Besides, training should be imparted to the farmers as most of them are technically unsound. Small farmers are not aware about quality of chicks, feed, disease prevention and control techniques, bio-security of farms, etc. They are unaware of some credit facilities being made available by banks, some reputed NGOs, etc. The government should open the horizon for selling and marketing of the products as well.

The writer is Senior Assistant Secretary, press and publication at the Institute of Chartered Accountants of Bangladesh.

From The Financial Express.