Apple is probably one of the few companies that can pull off a price increase. The new iPad Mini starts at $399, or $70 more than last year’s model. For that price, you get a leap forward in power, speed and display.

There are plenty of cheaper choices out there, including tablets for just $229 from Google a 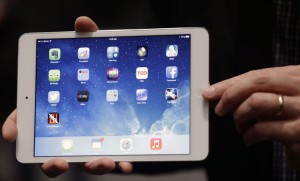 nd Amazon. None of them match Apple’s iPads in app selection, design and cachet.

Apple started selling the new iPad Mini on Tuesday, 11 days after the full-size iPad Air came out. The starting price of last year’s Mini has been cut to $299. In both cases, versions with cellular access are available for $130 more.

In many ways, the old iPad Mini was a 2011 full-size iPad 2 in a smaller casing. The old Mini’s display technology and its processor were already more than a year old when the device launched. It’s even older now.

Apple doesn’t skimp with the new model, which is officially called the iPad Mini with Retina display.

Retina is Apple’s term for a higher-resolution screen – in this case, one that sports four times the pixels in the same space as the older version. According to Apple, there are enough pixels such that the eyes shouldn’t be able to discern the individual dots that form text and images. You get much sharper images – even sharper than on the iPad Air, which has a resolution of 264 pixels per inch compared with 326 in the new Mini.

And while last year’s iPad Mini used the same A5 processing chip as the 2011 iPad 2, this year’s model shares the speedy, A7 chip found in the iPad Air as well as the new iPhone 5S. Apple says graphics are up to eight times faster than last year’s model and other tasks are up to four times as speedy. By contrast, the Air has only twice the speed as the previous full-size model.