The leaders of Bangladesh Garments Manufacturers and Exporters Association (BGMEA) said, the recent labour unrest in Readymade Garment (RMG) sector is nothing but a conspiracy to destroy the country’s leading export sector. They appealed to the government to take all out measures for saving the Readymade Garment (RMG) factories from unruly workers, as it is the property of state. 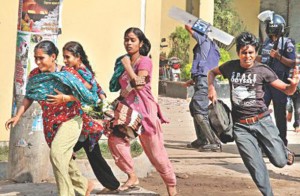 However, State Minister Shamsul Hoque Tuku said the garment owners had urged the government to find out the political leaders instigating unrest in the garment sector and wanted firm steps against them.

Meanwhile, the labour unrest in the industrial belt of Ashulia and Gazipur over salary hike has got additional sensation after death of two fellow workers on Monday. The movement continued for the 15th consecutive day on Tuesday forcing the authorities to shut at least 70 garment factories. Of the closed factories, at least 50 are situated in Gazipur  and 20 at Ashulia industrial belt, reports our correspondents.

Around 3,000 workers of different RMG units located at Jamgarah, Nishchintapur, Narasinghapur, Deron, Unique and Shimultola took to the streets at 9:00am.

Nazrul Islam, an inspector of Gazipur industrial police, said that workers started demonstration at Konabari and Kashimpur at 8:00am, protesting the deaths of two RMG workers during yesterday’s clash with cops.

They also demanded an increase of minimum wage and immediate reopening of the factories, which was shut last month following a labour unrest over salary. But police resisted the procession, which led to a chases and counter-chases with workers at Konabari and Kashimpur. The law enforcers later lobbed teargas canisters to disperse the demonstrators.

The workers tried to put barricade at Jamgarah but were resisted by police, said Ashulia Industrial Police Director Mostafizur Rahman.

As the workers threw brick chips into the law enforcers, police retaliated with bullets and teargas to disperse the agitators, he said.

At least 10 workers received injuries when the law enforcers tried to clear the blocked highway. A trade union leader has been picked up in Gazipur on suspicion that he might provoke workers to unleash reign of terror.

Injured workers took primary treatments at different local clinics. The authorities of at least 20 garment factories halted production at their units located in the 4-kilometre area beside the Dhaka-Tangail highway, the police official said.

Besides, production at minimum 50 RMG units at Konabari, Kashimpur and Zorun were suspended for today following labour unrest.

The Border Guard Bangladesh (BGB) and Rapid Action Battalion (RAB) personnel deployed at Ashulia and Gazipur on Monday, were seen patrolling along the highway to keep vehicular movement normal.

The workers have been demonstrating from November 5 for a minimum wage of Tk 8,300 rejecting Tk 5,300.