Speaker of the Indian Lok Sabha  Meira Kumar had conveyed to her Bangladeshi counterpart on Wednesday that India was ready to help strengthen parliamentary systems and structures in Bangladesh. Bangladesh Speaker Shirin Sharmin Chaudhury visited the Lok Sabha on Thursday, and however, managed to exit the House just as Indian MPs resorted to unruly acts over the division of Andhra Pradesh. 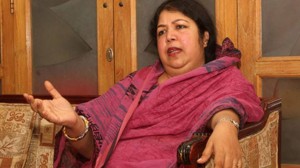 The Speaker of Bangladesh’s Parliament Jatiya Sangsad, was in the Lok Sabha’s special box as a state guest when the Lok Sabha met at 11:00 am. But she left Parliament House well before the protest took a violent turn and a Congress MP from Andhra Pradesh used pepper spray to protest against introducing the bill to carve out Telangana from the existing state.

Chaudhury did witness the beginning of the chaos, when the anti-Telangana MPs marched into the well of the House and started raising slogan against the move to split Andhra Pradesh, just minutes after the Lok Sabha began proceedings.

Speaker Meira Kumar, who welcomed Chaudhury on behalf of all the MPs, had to adjourn the Lok Sabha till noon.

Kumar didn’t mince words when criticising MPs for their behaviour, saying that India’s reputation had suffered as a result. “This has shamed us…This has shamed us. Our parliamentary democracy is admired throughout the world. Today what has happened is a blot (on democracy),” she said to journalists outside.