BNP Chairperson Khaleda Zia has said she does not think that many Bangladeshis go to India, as they are doing well in the country.

“Nobody has given any clear proof that there are illegal immigrants from Bangladesh in India,” Khaleda said in an interview with the Indian Express on Sunday. 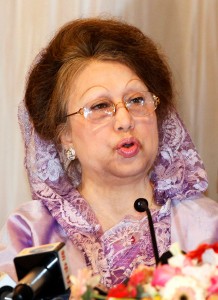 She was replying to a question on Narendra Modi-led Indian government’s stance on the illegal immigration in India.

Terming Modi’s invitation to Saarc leaders at his oath-taking ceremony a ‘welcome initiative’, the BNP chief said “It is also recognition of Saarc – conceived by my late husband President Ziaur Rahman more than three decades ago. Now, Modi has taken an interest in this… We feel that’s good for the region….”

“We want our country to develop, we want India to develop as well,” she added.

About the recent visit of Indian External Affairs Minister Sushma Swaraj to Bangladesh, the former premier said that they discussed bilateral issues during their meeting in Dhaka on June 27.

Swaraj has assured that Teesta and land boundary agreements will be done, Khaleda added.

Khaleda expressed her hope that the Bharataiya Janata Party-led government will be able to push the Land Boundary Agreement through in their parliament.

The agreement was signed in 1974 and Bangladesh ratified it the same year but India has not yet done so, she said.

“This has a negative effect on our relationship. Now that the BJP is in office with such a huge majority, it is expected that this will be resolved soon,” Khaleda added.

About West Bengal Chief Minister Mamata Banerjee’s role in blocking the Teesta water-sharing pact, the BNP chief said it was announced that the agreement on sharing of Teesta waters would be signed during the visit of Manmohan Singh in Bangladesh in 2011.

“At the last minute, the agreement was not signed on the ground that Mamata was opposed to it. The people of Bangladesh don’t know what really happened… I have not met Mamata, and I don’t know who blocked it. Our government says so. Hasina says so,” she said.

Replying to a question about the rights of minorities in Bangladesh, the BNP chairperson said, “I don’t use the word minorities. I say that every person in Bangladesh has equal rights.”

“When the Babri masjid demolition took place, I was PM, and I immediately clamped down on elements trying to incite communal tension in the country. We blocked TV coverage of the demolition. My ministers spent sleepless nights guarding the Hindu community,” Khaleda said.

Asked whether the previous Congress-led government kept its promises to Bangladesh, Khaleda said, “Actually it is the failure, or lack of will, of our government to protect the interests of the people of Bangladesh on unresolved issues that turned out to be the bigger problem.”

Talking about the Congress’s role during the general elections in Bangladesh, she said that she did not know whether it played a role. “Many believe that [it did],” she said.

She mentioned that then Indian foreign secretary Sujatha Singh came to Bangladesh before January 5 election and publicly said that Jatiya Party Chairman HM Ershad should participate, otherwise elections would not take place and the fundamentalists would come to power.

“She [Sujatha] tried to convince us also, but could not. We told her why we could not participate in the elections,” Khaleda said.

She stated: “We are a political party, not an underground outfit, but if elections are not fair, there is no point taking part. Later, Ershad said openly that he will not contest. But later, through some way….”

“In fact, Ershad said later that the foreign secretary put pressure on him. And they [India] are the only ones to give recognition to the polls. Even the Commonwealth and the UN said that they don’t support a one-party election…,” Khaleda said.

Asked whether she will visit India in response to Modi’s invitation, she said, “You know what the situation in the country is now, I am quite busy. There is no democracy in this country.”

“Ninety-five per cent of people are with us, and they want free, fair, impartial and inclusive elections,” Khaleda claimed.

The Indo-Bangla relation should address the interests of the people of the two countries, not any particular political party or individual, she added.

About BNP’s relationship with Jamaat, she claimed, “There is no ideological similarity. We are moderates, neither extreme right nor left.”