Over 2.5 lakh people sang the national anthem in chorus at the National Parade Ground on Wednesday marking the country’s 44th Independence Day and aiming to set a new world record. 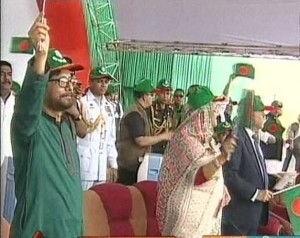 The Parade Ground turned into a human sea when thousands of people from all walks of life gathered there for taking part in “Lakho Konthe Sonar Bangla” in the morning.

Sponsored by the cultural affairs ministry and supervised by the Armed Forces Division the programme was telecasted live by all TV channels.

Noted artistes of the country, including Samina Chowdhury, Bappa Majumdar, Kanak Chanpa, Tapan Chowdhury, Shuvro Deb, Momtaz and popular band LRB performed at the venue to entertain the crowd before and after the anthem.

Earlier, Bangladesh set a Guinness World Record with the creation of the world’s largest human national flag using 27,117 people though an initiative of Robi Axiata Limited and Bangladesh Army.