The Institute of Chartered Accountants of Bangladesh (ICAB) is moving forward to develop the standards of accounting in the country. So, there is no need to form any super functional body to take upper hand over ICAB as the Institute is a professional body, said  Barrister Shafique Ahmed, Advisor to the Prime Minister on Law, Justice and Parliamentary Affairs.

He said, we do not find any oversight body to supervise the function of the Supreme Court Bar Association; then why should we need a super functional body to have control over ICAB. Such move is contradictory with the existing law; therefore the proposed Financial Reporting Act cannot be enacted. 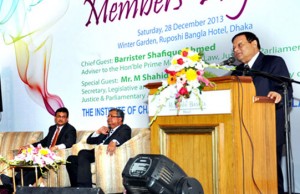 Barrister Shafique was addressing the Members’ Night 2013’ organized by ICAB on Saturday at the Winter Garden of Hotel Ruposhi Bangla, Dhaka.

Shafique appreciated ICAB’s advancement in the area like, now ICAB is following the curriculum of the Institute of Chartered Accountants of England & Wales (ICAEW) and maintaining the strong ties with the South Asian Accounting forum SAFA which is very commendable achievements of the ICAB indeed. He further said that Statutory Auditor certifies the Balance Sheet of the listed Companies. On the basis of that Balance Sheet, the Company sells its share certificates; he said adding that the investors should purchase the certificates after scrutinizing the Balance Sheet of the companies that reflects income, expenditure and wealth statements.

M Shahidul Haque, Secretary, Legislative and Parliamentary Affairs Division, Ministry of Law, Justice and Parliamentary Affairs said at present the level of confidence between the ICAB and the stakeholders is seem to be a notch down on ethical ground. He hoped that ICAB would take prudent steps to revive the level of confidence. He further said that the Institute was established in 1973 under Presidential Order No-2. Now the country has advanced in terms of modern technologies, so, it is high time to update the Order to cope with the current demand, he added.

The outgoing President of ICAB Md Abdus Salam FCA in his welcome address highlighted his activities throughout the year 2013 and the role of ICAB to bring transparency, accountability in accounting and auditing matters, widening the number of CA professionals and   expansion of the affiliation in the field of CA profession in overseas accounting bodies. The ICAB organizes the Members’ Night-2013 after holding its Annual General Meeting every year end.

The newly elected President of ICAB Showkat Hossain FCA echoed the views of Shahidul Haque and said ICAB is always eager to move forward to cope with the modern technologies advancement. The ICAB welcome any bid to change the CA order and Bye-Laws of the Institute, he said.