The former defence minister defeated her opponent Kul Bahadur Gurung by 327 to 214 votes to become the Himalayan nation’s ceremonial head of state. 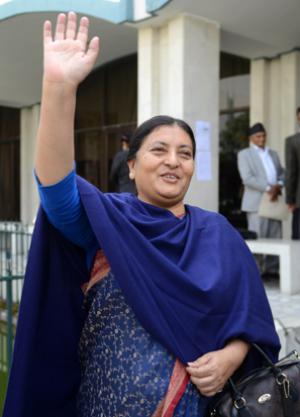 He was elected as the first president in 2008 following the abolition of a 240-year-old Hindu monarchy.

“I announce that Bidhya Devi Bhandari has been elected to the post of Nepal’s president,” said Speaker Onsari Gharti Magar, to loud cheers from lawmakers.

Bhandari, a rare female face in Nepal’s parliament, took up politics in her teens, seeking to overturn the absolute monarchy and later marrying a fellow communist, Madan Bhandari.

But it was after her husband’s death in a vehicle accident in 1993 that the mother of two became a prominent voice, riding a wave of sympathy to win a seat in parliament.

Yadav was initially supposed to hold office for only two years. But years of political wrangling delayed agreement on a new constitution, which was only finally adopted last month.

Bhandari, 54, is the second woman to be elected to a senior position since then, after Magar became the country’s first female Speaker.

As required by the new charter, parliament also this month elected a new prime minister, KP Sharma Oli, who is tasked with unifying the earthquake-hit country.

The constitution, the first drawn up by elected representatives, was meant to cement peace and bolster Nepal’s transformation to a democratic republic after decades of political instability and a 10-year Maoist insurgency.

But it has instead sparked deadly violence.

More than 40 people have been killed in clashes between police and ethnic minority protesters, who say a new federal structure laid out in the charter adopted last month will leave them under-represented in parliament.

Work on the constitution began in 2008 after Maoist rebels laid down arms and entered politics, winning parliamentary elections and abolishing the monarchy. But power-sharing squabbles between parties stymied progress.