Aiming to bring down average inflation to 7 percent, Bangladesh Bank (BB) on Monday announced cautious monetary policy for the 2nd half of the current fiscal year.

Terming it a challenge, BB governor Dr. Atiur Rahman said,  BB will pursue in half fiscal (January-June 2014), based on an assessment of global and domestic macro-economic conditions and outlook. 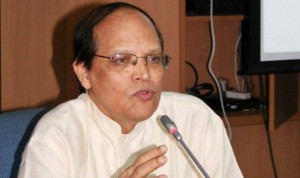 He announced the Monetary Policy Statement (MPS) for January to June of the FY 2013-14 in his office in the capital.

Both monetary and financial sector policy instruments would be used to achieve its goal on inflation and to ensure credit growth sufficient enough to stimulate inclusive economic growth, said the new monetary policy of the central bank.

The task of bringing down inflation “Would be a challenge”, said BB governor.

“The persisting inflationary pressures over the past few months with the risks ahead related to the inflation outlook imply that achieving the FY14 inflation target will be challenging. As such BB has decided to keep policy rates unchanged,” he said.

As there is sufficient liquidity in the banking system; an easing of reserve requirement ratios is also unnecessary. Average inflation raised from 6.99 percent to 7.53 percent in the second half of the fiscal year driven by higher food prices, the new policy describes.

This MPS was preceded by productive consultations with key stakeholders and web-based comments. The last MPS (July 2013) was based on certain key assumptions and policy directions. A review of developments over the past six months suggests that most of these key assumptions materialized and solid progress was made towards the key goals. The July 2013 MPS explained that policy rates were being kept unchanged due to the risks of inflationary pressures stemming from wage increases and supply-side disruptions. The last MPS also aimed to contain reserve money growth to 15.5 per cent and broad.

Demand imposed by countrywide shut-downs in recent months led to non-food point-to-point inflation falling from 7.4 percent in July to 4.88 percent in December due to sluggish aggregate

Supply bottlenecks along with rising food prices in India led to point-to-point food inflation rising from 8.14 percent to 9 percent during the same time period.

The central bank slightly revised up its forecast for the growth in gross domestic products (GDP) to 5.8 to 6.1 percent for the current fiscal year, from 5.7 percent-6 percent earlier.

It said, due to sluggish services and construction sectors and negative growth in remittances resulting in lower aggregate demand, the economy will grow by closer to 6 percent in the current fiscal year if there is no major disruption to the economy in the remaining months of the fiscal year.

The central bank forecasts output growth will pick up in the second half of the fiscal year, which will partly make up the losses in the first half.

The government has targeted 7.2 percent growth in gross domestic product in 2013-14.

The target of private sector credit growth of 16.5 percent is sufficient to accommodate any substantial rise in investment over the next six months, said the MPS.

The monetary stance assumes the government borrowing from the banking sector will remain around the budgetary target of Tk 26,000 crore.

Overall private sector credit growth, from both local and foreign sources, amounted to 13.8 percent in November 2013.

The central bank said, gross non-performing loans rose in the banking sector from 11.9 percent of the year-end to 12.8 percent at the end of the first quarter of the fiscal year due to the ‘over-hang’ of earlier scams inthe state-run banks and the difficulties businesses faced in repaying loans in all banks during the recent shut-downs.