The Labour Court of Oman has recently ordered compensation to 36 Bangladeshi workers who had been working for a construction firm in the Sultanate without regular salaries for over two years.

The men, who are now waiting for their tickets and passports, will be given their dues ranging from RO1,000 to RO1,500 on the day of their departure.

A Bangladeshi Embassy official said, “Some of them might have problems like non-availability of passports, which we’ll take care of. The embassy will solve any other problem as well.” 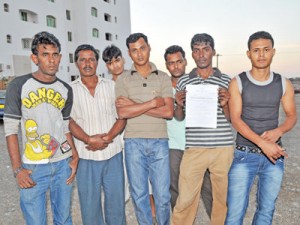 Sheikh Sekander Ali, the Ambassador of Bangladesh to Oman expressed his “deep appreciation’ to all Omani authorities concerned who were involved in the process of delivering justice to a good number of affected Bangladeshis”.

“The past two and a half years were a nightmare. I sold my land, house and cattle to pay for the visa to Oman. My family thought it would give us a better life, but it was just the beginning of a battle to survive,” said Zahir, 30 who is among the workers hired for salaries of RO90 to RO150. All have not been paid for a year and a half.

At first the salaries were erratic and then were stopped altogether, they said.

Upon landing in Muscat in 2011 they discovered they will be working at construction sites. They say basic amenities like food were not provided and that they lived in a camp in Mabela Industrial Estate without electricity or proper water supply.

“We were not provided with food for the first week, and soon figured out that things were not going to improve. Managing without salaries was tough and we did odd jobs to earn some cash,” Zahingir, 34.

“We are now looking forward to go home. We have been given some sustenance money after the court order. The Bangladeshi Embassy provided us food for some time,” Mohammad Farooq Islam, another worker said.