Five days after his kidnapping, the body of 6-year-old Harun-ur-Rashid was discovered dumped in wetlands near Sirajganj, north of Bangladesh’s capital, Dhaka. The child’s kidneys were cut out — a victim of the country’s black market organ trade. 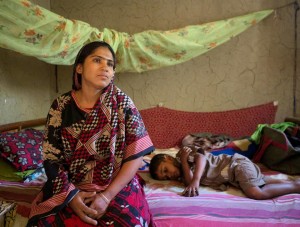 After Harun disappeared from the village of Tebaria on April 22, the boy’s father, Abdul Hannan, feared the worst and contacted authorities.

One arrested suspect told police Harun was drugged before being taken under a bridge where three waiting men had arrived from Dhaka. The suspect said a surgeon performed the operation on the spot, according to local media reports.

“Five days later [police] called to say they had found his body near another village,” Abdul Hannan recounted. “I went to collect him and could see where they had cut into his back.”

He held a small poster from the funeral, with a chubby-faced toddler looking out. The most recent photograph of Harun was 3 years old. Hannan said he would remember his son as a happy child. “My heart is tearing,” he cried. “What can I say? If I could show you my heart, you would understand. They have destroyed our family and destroyed our happiness.”

The people of Tebaria live in the crushing poverty of rural Bangladesh and in fear of local banditry. Some described lawlessness — accentuated by ineffective and corrupt local authorities — and said 15 local children were killed the same way as Harun in the past year. Dhaka’s police department did not respond to a request for comment.

“It’s a very dangerous situation here, and we can’t trust the people who do these crimes will face justice. Nothing will happen to the kidnappers,” said Kulshed Alom, a member of a local community watch program.

Three local men were arrested for the kidnapping, but there remained no news on any search for the Dhaka syndicate members. As a laborer unable to afford a lawyer and the time away from work, Hannan said he had couldn’t pursue a criminal case and was certain his son’s killers would not face justice.

“They should be hanged by the rope, those who killed my child,” he said. “I don’t want to see other parents in the same condition as my family. This story shouldn’t be repeated.”

The Bangladeshi judiciary is rife with nepotism and embezzlement and lacks independence, according to U4 Anti-Corruption Resource Centre, a Norwegian research body. This has allowed the black market trade in human organs to flourish, according to Monir Moniruzzaman, an anthropology professor at Michigan State University who has spent the past 12 years researching the trade’s commodification and exploitation of poor Bangladeshis.

In addition to people being kidnapped and their organs stolen, some willingly sell their organs on the black market through local brokers who contact regional and national syndicates to facilitate medical procedures and find buyers for kidneys and livers. Desperation, combined with a lack of law enforcement, enables brokers to entice impoverished Bangladeshis with offers of easy money.

“If there was genuine concern on the government’s part we would see some action, but we haven’t seen anything,” Moniruzzaman said. “The law is not being enforced, and on the criminal justice side there are reports of cases being deliberately weakened.”

In August 2011 revelations emerged of a trafficking ring based in Joypurhat district, near the Indian border. Police arrested local brokers and extended investigations to the Dhaka-based syndicates. It was revealed that more than 50 people in neighboring villages had sold kidneys or parts of their livers. While the cases brought attention to the trade, only local brokers were arrested. Promised legislative reforms and police cases stalled. Under the Organ Transplant Act, passed in 1999, violators can face sentences of three to seven years in prison and fines of 300,000 taka (about $3,850).

“The police did a great job to expose these brokers in Bangladesh and their extended networks in India,” Moniruzzaman said. “But these brokers were released on parole and are now back in their areas and selling organs just like before. There is no repercussion for them, which indicates brokers are most likely paying money [to police or government authorities] so they can continue to run their businesses.”

Bangladeshi police did not respond to multiple requests to respond to accusations of corruption and complicity in the organ trade.

“If police are taking action, how can people still be going to sell organs?” asked Selina Akthar, a resident of Varondy village, who was named as a seller in the police investigation. Along with her husband and father-in-law, she sold a kidney in 2011. “The brokers give money to the police so there is no case against them, and police know when donors get back, and they go to their homes to take money from them.”

Invariably those selling their organs face economic hardship. Some approach local brokers after hearing stories of easy money, and others are targeted by brokers aware of excessive debts. Often surgery is undertaken without any knowledge of the long-term health implications.

“I thought they would take my kidney, but they said they wanted to take part of my liver,” said Mehdi Hassan, a farmer from Bamongram village who underwent the operation in 2009. “I didn’t know what a liver was, but was told my health would be restored after three years. Now I have a weight in my body, it’s difficult to breathe, and I can’t walk for a long time.”

Mohamad Akhtar Alom, also from Varondy, stayed in a Dhaka hospital for two weeks after selling his kidney. He told his family he was going to work pulling rickshaws and was sent home by bus with less than half the money promised him.

“I was crying and helpless,” he said. “I became very sick, but I knew nothing about it. I couldn’t carry 5 kilograms or walk fast. There was pain in one side of my body, and I had blurred vision.”

Sellers of organs typically reported receiving far less money than promised but lack any means to recover their losses. The criminal nature of the activity prevents any legal recourse.

Dr. Luc Noel, a special adviser on medical products of human origin to the World Health Organization, said commodification of the human body and global inequality produce the environment for such a trade to exist.

“Profit on the human body means exposure to the poorest layer of the population, and on the global level this collides with inequality and the incapacity of some governments to regulate,” he said.

Despite the exposure of the Joypurhat’s trafficking ring, locals continue to sell organs, with syndicates arranging operations in India.

One man who sold his kidney in April 2013 said false national identity cards, passports and legal documents are arranged to show a family connection between seller and recipient in order to meet Indian regulatory requirements.

“They made legal documents in Bangladesh to say I am the brother of the recipient before we traveled to Kolkata for the operation,” he said, speaking on condition of anonymity out of concern for his safety.

Razia Begum, of Durgapur village, seemed content after selling part of her liver in December 2013. She said she received all the money promised her from brokers. “The brokers arranged my passport and took me to Delhi. I was treated well, and it was very nice,” she smiled, adding that the $5,000 she received was used to pay loans, build a modest mud brick home and to cover her 15-year-old daughter’s dowry.

Officials at the Ministry of Health did not respond to a request to explain government action to prevent the continued activity of brokers.

Because of control by unscrupulous criminal entities and a lack of transparency, both organ sellers and recipients are vulnerable to exploitation. Moniruzzaman said transplants can cost $14,000 for a kidney and $40,000 for a liver.

“Many of the recipients have great difficulty to continue postoperative care even though they’re privileged to have a transplantation. But it’s a business model, so more transplants mean more profits, and tissue and blood groups are often not properly matched,” he said.

Despite the many risks to buyers and sellers, there seems to be no shortage of hard-pressed people willing to sell and receive organs.

“The exposed syndicates in Joypurhat are only one area we are talking about, but it’s happening all over Bangladesh, poor people are flocking to Dhaka to sell their body parts. People are dying for it,” Moniruzzaman said. “In the past 12 years I’ve researched organ selling, it’s widely expanded. Brokers across Bangladesh have wide networks, and there’s no government action to combat or curb this in any way.”

In Tebaria, Abdul Hannan and his wife, Hafiza, grieve and are afraid to allow their remaining daughter leave their sight. “I take her to school myself, but I feel sick when I leave her,” Abdul said.