Such irregularities have seriously undermined the main objectives of reducing salinity and ensuring higher water flow in the Gorai River, an evaluation report of the government’s Implementation, Monitoring and Evaluation Division (IMED) has revealed.

Officials concerned said the salinity of the Gorai River has increased, water flow has not improved and the river erosion is continuing even after completion of the major portion of the project in last five years, the Financial Express reports. 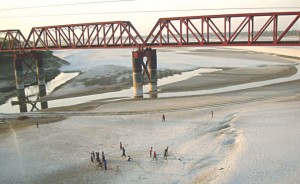 The IMED under the Planning Commission has detected the irregularities in the ongoing Gorai River restoration project, being executed by the Bangladesh Water Development Board (BWDB). Nearly 60 per cent of its work has already been completed.

Not only the poor project operations, the objectives of the scheme have not been achieved, the evaluation report of IMED, prepared by an independent consultant said.

Besides, the project officials have indulged in irregularities in procurement of two dredgers, manpower recruitment and training operations, the report said.

Sources said the salinity in Khulna, Mongla and Hironpoint near the Sundarbans has increased even after implementation of nearly 60 per cent of the project work in last five years.

The IMED report said: “The main objective of the project was to lower the salinity level to 1.0 part per thousand (ppt) at Khulna and 20ppt at the Sundarbans Reserve Forest. But the result shows that the target has not yet been achieved.”

About the support to irrigation and income generation, the project has failed to bring desired results as the crop production has been hampered and the fish production is also affected in the dry season due to less flow of water in the Gorai.

The water flow during the rainy season goes up when the Ganges disposes more water to the Gorai.

The navigability of the river has not improved in 2013 compared to that in 2009, the IMED evaluation report stated.

At this moment only six staffs of mechanical engineering background are working with the project although it needs 55 personnel, sources said.

The project authority has also violated the rules in the case of manpower training. Some 28 officials were sent to the Netherlands to attend training courses at a cost of Tk 29.7 million in 2011 and 2012. But only one of them was from the project and the rest were from different government agencies like the water resources ministry, BWDB, IMED and Planning Commission, according to the evaluation report.

Nazir Ahmed, the director of the project, was contacted repeatedly to get comment on the irregularities in the project. But he did not respond.

Director General of the Bangladesh Water Development Board (BWDB) Sohidur Rahman was not available for comments as he was abroad when this report was filed.