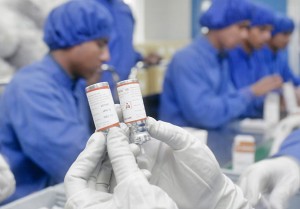 “Demand for our products is growing every year and this is largely because we have focused on producing quality products by strictly following international standards,” former Eskayef Bangladesh Managing Director A. M. Faruque told Khabar South Asia.
Some experts attribute the spectacular growth to favourable government policy and a special focus on producing quality products.
“There is no doubt about the fact that we are now able to produce the best quality medicine and that’s largely because of the fact that we have not compromised on the quality of the products,” Dhaka University pharmacy professor A.B.M. Faruk told Khabar.
Expanding markets
According to International Marketing Services (IMS), Bangladesh’s domestic pharmaceuticals market grew nearly 13% to $250m in 2013.
In addition, per the Commerce Ministry’s Export Promotion Bureau (EPB), Bangladesh now exports to about 85 countries including Austria, Denmark, the UK, Germany, France, Singapore, Indonesia, Vietnam, the Philippines, Brazil, Pakistan, Burma and Yemen.
“Our products are being accepted with confidence at home and abroad because of the high quality,” said Directorate General of Drug Administration (DGDA) Director Selim Barami.
According to the DGDA, 194 of 275 government-registered pharmaceutical companies regularly produce items like cough syrup and flu tablets. Square, Incepta, Beximco, Acme, and Eskayef account for 45% of Bangladesh’s total production, manufacturing products for export in state-of the-art factories.
Companies like the UK’s GlaxoSmithKline, Switzerland’s Novartis and France’s Sanofi have set up plants producing life-saving vaccines, anti-cancer drugs and other high-end products in Bangladesh.
Industry growth has created employment opportunities – including for pharmacists, chemists, microbiologists and doctors – that pay well enough to keep professionals from going overseas. Bangladesh is trying to establish an industrial park for pharmaceutical production.
“One such park in Munshiganj near Dhaka is nearing completion and we are hoping to see a big jump in our income from pharmaceutical exports,” Health Secretary A. M. M. Neazuddin told Khabar.
-Courtesy