Local solar power industry being affected badly due to import of sub-standard panel, although it has boosted capacity by double to manufacture the panel against the demand of solar power generation.

If the import of solar panel is not stopped or controlled immediately, the potential solar energy sector will be destroyed. 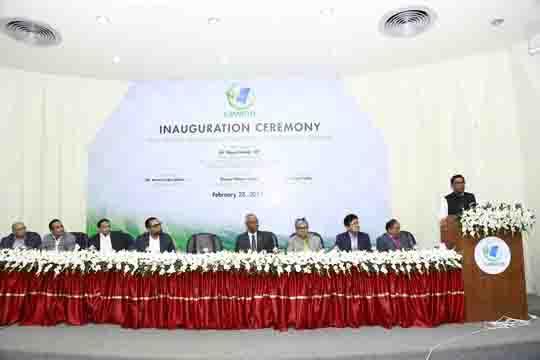 guests and investors in the sector said, domestic investors are being affected severely while local users are losing trust and confidence in using solar power as the low-graded imported modules get cankered in a short time.

Nine local companies with the combine investment of BDT 2 billion is facing severe risk in the absence of specific and effective policies for the industry as well as high interest rate of bank loans.

Nasrul Hamid MP, State Minister for Ministry of Power, Energy and Mineral Resources addressed the event as chief guest with Munawar Misbah Moin in the chair.

Nasrul Hamid said, “Government is working to make Bangladesh a middle-income country by 2021. We want to bring 100% population of the country under electricity coverage and it will be implemented from different types of primary energy. A master plan is under way prioritizing future energy especially solar and other renewable energy. This kind of energy has 10% share in energy mix of the plan.”

He said, Roof top opportunity in urban area is huge for generating solar energy. Government has planned to take 2000 acre land in Mirersorai and Gaibandha to establish solar park. private investors can easily invest there.

Urging private entrepreneurs for investing this sector, the state minister said, “Renewable energy is the key to achieving the government’s goal of power sector. United effort is a must for ensuring production and uses of green and clean energy. Our government will give every possible support to the investors. Facilities are already being provided to develop and expand the solar power sector.”

Md. Anwarul Islam Sikder said, “we want to help renewable energy entrepreneurs with technical knowledge and financial assistance. But investors have to make government realize why tax exemption is necessary for the growth of this industry.”

Mizanur Rahman Joddar said, “There is no alternative of renewable energy to ensure clean and sustainable energy. Solar power is the best option to expand electricity services in rural and off grid area. There is immense scope to use of solar energy in agriculture, home and trade. But, we have not been able to capitalize that opportunity till now. On the one hand, we need more technological development to ensure maximum use of solar energy. Besides, there is a need to ensure different kind of financial incentives. Bangladesh Bank has already undertaken various programs to increase the use of environment friendly fuel. We are interested in providing the necessary support for the development of this sector.”

Mahmood Malik said, “Sustainable energy is a pre-condition for sustainable development. The world is now moving towards the use of renewable energy. Solar power is the best choice as a fuel of the future. Bangladesh has been a great success in solar home systems. Yet our use of fuels produced from renewable energy is only one percent. Now government planned to use 2,400MW renewable energy, 10% of total energy consumption by 2021.”

Munawar Misbah Moin said, according to the adopted plan of government some of 30 lakh family will get solar power by the end of 2017. The import of solar panel might be stopped to establish the ongoing plan of the government otherwise BDT 11 billion will be gone outside from the country.

Golam Baki Masud said, Though Prime Minster gives priority to solar power as an alternative fuel, there hasn’t been made any definite and effective regulations on this. The developed countries of the world enforce strict law to protect their solar panel. The neighboring country India made it mandatory to use nation’s made solar panel. They used their solar power to light the street. He draws the attention of Bangladesh Bank to come forward to inspire these producer by giving long term loan in small interest.

Mosiur Rahman Said, In perspective of Bangladesh, for the development of green economy of the country, the environment friendly solar power is a great potential sector. To reduce the emission of carbon and to secure sustainable fuel along with the ensuring the growth economy, renewable energy Will be an effective weapon. To flourish the sector, he demanded for tariff free facilities.