In these modern times, the world has come closer. And to the greatest extent, social media has taken over every other method of communication. From Facebook to email, digital communication methods are now bound to nothing. However, there is one social media app that is the most controversial of them all: TikTok. Many may argue that this social media service is quite entertaining, but there are some points to raise regarding users and their usage.

TikTok is a video-focused social media app. It is owned by a Chinese company, ByteDance Ltd., and it is the global version of a similar Chinese app, Douyin. Generally, it was launched in 2017, before it merged with Musically in 2018. Since then, TikTok has surpassed over 2 billion downloads, and for now, it has over 689 million users worldwide. But astonishingly, one-third of its users are children under fourteen, according to a New York Times report from 2020. For this, TikTok even faced serious pressure to be banned in the USA. The Indian government has already banned this app in 2019.

The users of this app make fifteen-second to ten-minute videos, with genres varying from a number of fields: dancing, tutorials, hacks, ideas, recipes, etc. Like any other social media app, TikTok rewards its content creators by paying them an astounding amount of money, which is a well-known marketing strategy to lure new users to the platform. As one-third of its users are adolescents, easy money-making opportunities seem lucrative, and ultimately, they fall into the trap of this money-making 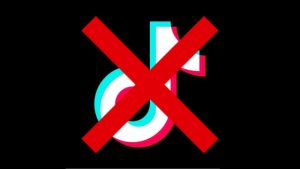 thriving industry. However, to be a part of this money-making framework, a creator has to reach a specific milestone of views and followers. For example, having 1–13k followers might help a user earn $100.

Ironically, in TikTok, views can be gained by non-users as well. One can share a link on any other social media platform and whenever someone follows the link, they will be counted as a viewer. Even so, sharing a link is not enough, as it has to be clickable! Most children use clickbait thumbnails to get attention on other platforms.

Furthermore, kids and teenagers try to follow ridiculous trends such as “the seizure challenge,” where they faint after having a tonic-clonic seizure to the song “Lucid Dreams” by rapper Juice WRLD; “in my feelings challenge,” where users get out of moving cars to walk and dance; “the Benadryl challenge,” where they drink a whole bottle of Benadryl and hallucinate to record their further experience, which caused the death of a 15-year-old Oklahoma girl. All of these are only to gain views and fame. These absurd and sensitive trends spread incorrect information about serious medical conditions and are also sensitive to patients. Students who follow these trends lack conscience and fail to grow into maturity.

One might say that not everybody follows these absurd and dangerous trends, but large numbers of users start using and viewing TikTok videos before they can grow a conscience. As a result, they immerse themselves in a world of phoney success and image. They spend money on props to follow the trends and challenges, and they spend their time watching the content of no use instead of studying. Furthermore, they are seen making videos in public places, social gatherings, or events while looking ridiculous themselves and making everyone around them uncomfortable to keep up with the obnoxious framework of TikTok.

It would be unfair not to mention that TikTok is beneficial for small businesses to grow as there is a real user engagement, there are numbers of supportive and positive viewers alongside the negative ones, there are actual cooks or professionals to share their recipes and tips with their followers, and artists to share their art. However, in front of the negative sides, the positive portion seems less important.

As the saying goes, “Forbidden fruit tastes the sweetest.” Individuals will find a way to use the app one way or another, even if it’s banned. Also, banning this app might not be the solution at all. Parental control and proper guidance are what the younger generation needs. They need to grow a conscience before they can start using such apps so that they can rule out the wrongs from the rights on their own. Also, the app itself needs to introduce strict guidelines for its users and monitor the public videos using more advanced algorithms. In this way, such apps, especially TikTok, can be less controversial and more of a source of entertainment.