The finance minister, Abul Maal Abdul Muhith, in the parliament on Thursday proposed a budget of Tk 2,50,506 crore for the 2015 financial year, with a deficit of Tk 67,552 crore, or 5 per cent of the gross domestic product, which could go up as resource mobilisation looks ambitious.

The minister proposed wide direct and indirect taxes aimed for both the ordinary people and the rich while giving a breather to most industries. 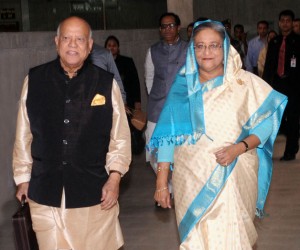 The budget outlay is 16 per cent more than the revised budget of the outgoing financial year. The growth of the gross domestic product that measures yearly economic expansion has been set at 7.3 per cent.

The budget proposal, which presents rosy picture for the next financial year regarding domestic and external resource mobilisation, has, however, not taken into consideration that political environment could turn out restive in the year.

‘We hope that in the next fiscal, investment, export and remittance flows will increase as it is expected that the global economy will experience accelerated growth. During this period, food and energy prices on the international market are likely to decline slightly. Besides, an investment-friendly monetary policy will be maintained ensuring uninterrupted credit flows to the productive sectors,’ the minister said in his speech.

‘Foreign investment and assistance are expected to increase. Credit and input support will continue in the broad agriculture sector…. I am expecting favourable weather and political stability. Based on these assumptions and expectations, we have set the GDP target at 7.3 per cent for FY 2014–2015.’

Muhith in his proposal laid out an ambitious revenue collection, especially from the National Board of Revenue portion, even after the sector’s revised target for the outgoing financial year was slashed by Tk 11,000 crore.

The target set for the revenue board, which generates about 80 per cent of  total revenue earning, is Tk 1,49,720 crore, up by about 20 per cent from the revised estimate of the outgoing financial year.

Revenue officials believed that income flow could be increased from major sectors such as land registration, individual taxes and measures against tax evasion.

The budget widened indirect taxes as the existing truncated base value system would be replaced with a 15 per cent VAT proposed on air-conditioned bus, launch and railway services.

The current rate of 4.5 per cent VAT applicable to English-medium schools, motor garages, workshops, photograph makers and immigration services has been proposed at 15 per cent.

The budget proposes that house rent of more than Tk 25,000 should be transacted through banks.

Of the public deficit of Tk 67,552 crore, the budget proposes Tk 26,519 crore to be coming from foreign aids, up by about 26 per cent from the revised target of the outgoing financial year.

The allocation (development and non-development) for physical infrastructure has been proposed at Tk 75,533 crore, which is 30.15 per cent of the total outlay against Tk 61,768 crore, or 28.57 per cent, of budget for the outgoing fiscal year.

Of the total allocation proposed for infrastructure, the Bridges Division would get Tk 8737 crore, the Roads Division Tk 6858 crore and the Local Government Division Tk 15,464 crore, the proposal said.

Of the non-development budget of Tk 1,68,699 crore, the highest 18.14  per cent would be spent on interest payment followed by 15.7 per cent on public administration, 10.9 per cent on education and technology, 8.5 per cent on defence, 9.9 per cent on subsidies and incentives and 6.1 per cent on social security and welfare.

The budget has a block allocation of Tk 2694 crore, which is Tk 701 crore in the revised budget for the outgoing financial year.