Bangladesh’s trade deficit narrowed slightly in the first 10 months of the current fiscal year 2013-14 ending in June on the back of an increase in exports, said a central bank official Wednesday. 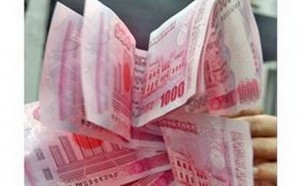 The official, who preferred to be unnamed, told Xinhua that Bangladesh import payment recorded 24,317 million U.S. dollars, up 13.58 percent, in July-April period, while earnings from exports stood at 30,211 million U.S. dollars, 10.54 percent higher, compared to the same period of last year.

Officials said remittances from nearly nine million Bangladeshis, living and working abroad, helped offset the impact of the trade shortfall and kept the overall balance of payments in surplus.

The BB data showed in the 11 months of the 2013-14 financial year inflow of remittances stood at nearly 13 billion U.S. dollars.

Bangladesh’s trade deficit between July 2012 and June 2013 slid by about 25 percent to 7.01 billion US dollars year on year.