Shabdi D’Costa was in her forties, barely surviving with her three daughters on her husband’s Tk 1,800 (US $22) salary, when she decided to find a way out of poverty by taking charge of the family finances.

“We barely had enough money to feed and clothe ourselves,” said Shabdi. “I needed to learn to manage our money so that we could plan for our rainy days.” 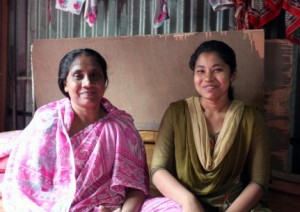 This was four years ago.

Her husband was an assistant at a textile factory in Narayanganj – an industrial town on the outskirts of the capital Dhaka – and the sum of the family assets consisted of a bed.

Shabdi’s family is among roughly 10 million people in urban Bangladesh who live in slums or shanties, facing the threat of eviction and deprived of access to basic services.

Desperate for a break, Shabdi turned to UNDP’s Urban Partnerships in Poverty Reduction (UPPR). Working in partnership with the Government of Bangladesh and UN Habitat, the programme offers poor urban communities resources, knowledge and skills to increase their income and a space to mobilise and create community development committees. Shabdi was selected by her peers to represent the poor households of her neighbourhood, as the “Didi” or “elder sister” whom local women seek out for advice and arbitration.

“I was very excited when I got this opportunity because as a committee member I could receive training in savings and credit management in exchange for the unpaid work of helping other poor households – specifically families of single or abandoned women,” says Shabdi.

Small cash transfers from the programme have so far put more than three million people in urban areas on the path to a better future. Modeled on Brazil’s highly successful Bolsa Familia (family grants) scheme, it offers education stipends, apprenticeships, block grants and access to safe water and sanitation, with women holding 90 per cent of the office bearer posts.

“I am not very educated, but I know enough to understand that education is the ticket out of poverty,” says Shabdi.

“I want to ensure that my daughters get all the opportunities that I was denied because of my poverty,” she adds.

For two years Shabdi witnessed families from her slum transition from poverty to small business owners.

“I watched and learned a lot in those two years – about how to prepare applying for a grant, and how to use this money wisely,” she says. “I learned from the families that found happier days – and I learned from the ones who spent unwisely.”

Shabdi did so well as a community leader that she was offered a teaching job at a preschool in her slum, and now earns Tk 1,000 (US $12) a month. As modest as this sounds, she now has savings of over Tk 2800, along with a steady income.

Her story is an example of the country’s great progress in reducing poverty. In the past 20 years, Bangladesh has nearly halved its poverty in terms of the national poverty line.