Representatives from major US Companies expressed their keen interest to invest in Bangladesh at a Luncheon Discussion in New York which was attended by Bangladesh Ambassador to USA H.E. Mr. Mohammad Ziauddin. The event was held on 6 February,2015 by the Business Council for International Understanding (BCIU), a prominent think-tank founded by US President Dwight Eisenhower in 1955. 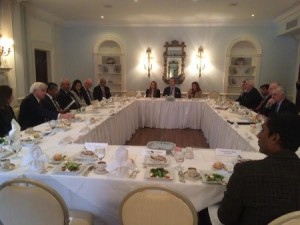 Narrating Bangladesh as strategically located and a regional hub, Ambassador Mohammad Ziauddin spelled out the measures taken by the present government to attract foreign investment. He pointed out that after assumption of Office, Hon’ble Prime Minister Sheikh Hasina visited neighboring countries “to promote regional connectivity” which is vital for bringing prosperity in the region. While sharing the strong economic indicators of Bangladesh, the Ambassador particularly drew attention to the thrust sectors for investments such as power, energy, shipbuilding, agro-processing, pharmaceuticals, ceramics, ICT, telecommunication etc. He specially sought their support for duty-free , quota-free access of the RMG products of Bangladesh in the US market.

The presentation by the Ambassador was followed by a lively Question & Answer Session in which he replied to the queries of the inquisitive investors. Representatives from Citigroup, MasterCard International, Ellicott Dredgers, Coca-Cola Co., Fontheim International, American Eagle and Sikorsky Aircraft, among others, were present. They expressed their keen interest to invest in Bangladesh. It may be mentioned here that some of the participating Companies have already invested in Bangladesh and their renewed interest indicate their readiness to benefit from the liberal investment climate prevailing in the country.

The Ambassador’s participation is a part of Embassy’s continuous initiative to reach out the stakeholders in the US having deep business interests in Bangladesh.