The trailer of Shah Rukh Khan-starrer ‘Happy New Year’ will be unveiled on the eve of Independence Day Aug 14 at a star-studded event here to celebrate the ‘Indiawaale’ sentiment which is inherent in the movie. 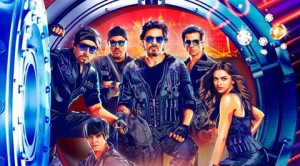 The event will be ‘Happy New Year’ presents ‘Indiawaale’ celebration.

“Indiawaale sentiment is an integral element of the film hence on the eve of Independence Day, the first look of the film is being launched as a part of Indiawaale celebration,” read an official statement.

“Unlike other trailer launches, there will be surprise performances based on the theme of Indiawaale and a huge digital campaign has been put in place to make sure that the trailer is seen by most of the audiences of Indian cinema across the globe,” the statement read further.

Farah is ecstatic about the plans.

She said: “’Happy New Year’ has been my dream project for a very long time and I am thrilled that Shah Rukh and I got back (together) after seven years to make it. The first look is all important these days and we have worked very hard to make ours exciting, entertaining and encompassing the spirit of our film.”

This trailer launch won’t just have mediapersons, but also for some fans who will also be present for the launch.

“Happy New Year” promises to be a “rollicking, flamboyant, colourful, witty, action-packed musical bonanza”. It will be distributed by Yash Raj Films worldwide, and in India, it will release in Hindi, Tamil and Telugu.