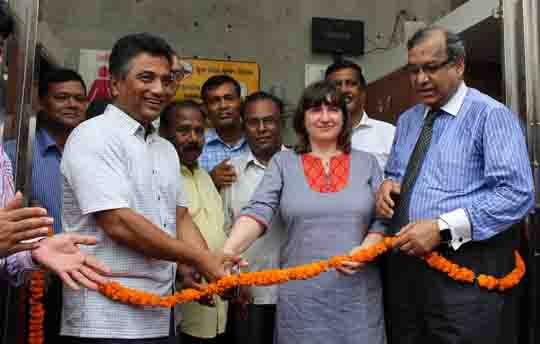 Conscious Foundation and WaterAid Bangladesh are providing financial and technical assistance to this.

Honorable Mayor Mr. Annisul Huq said, in total 4 modern toilets have already been built and another 14 are under construction. We have planned to build some 100 toilets across the city.

Johan Frisell, Ambassador, Embassy of Sweden got attraction due to his bilingual speech. He said, such type of toilets is needed in order to ensure public heath, gender equity, women safety and beautification of the city.”

Taksim A Khan, Managing Director, Dhaka Wasa said, experience from Gabtali public toilet indicates it will be very useful and sustainable system. We just have to ensure its proper management and WaterAid sustainable business model needs to be replicated in the future project.”

Therese Mahon, Head of Region, WaterAid said, “Safe and arranged toilets are being constructed. The community have to come forward over its maintenance.”

Dr. Md. Khairul Islam, Country Representative, WaterAid Bangladesh said, “City Corporation, Water Aid and H&M Foundation have jointly brought the facility for the commuters. The maintenance will be ensured under the public leaders.”

Speakers in the event have expressed concern over the public sanitation system in the city, especially for the commuters. They have urged to construct proper sanitation facilities, primarily, toilets of safe and hygiene condition for women. Through this establishment WaterAid expects to stimulate the urban norms for rigorous improvement in the sanitation environment.

A study on the public toilets in Dhaka City commissioned by WaterAid in 2011 revealed that, out of 47 public toilets more than half of them are not in minimum serviceable condition and they don’t have women & child friendly facilities. Water supply in the fresh rooms is in acute condition. The scenario reflects alarming and hazardous environmental health of the city.