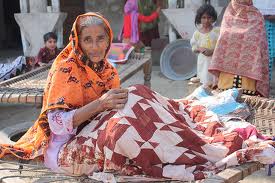 Most of these women are not Christian and come from rural communities in the country. This is the case of Haricha Begum, 38, who after meeting the CJW learned to produce hand-made items . She got married when she was only 12 years old, but her husband was a day laborer without land ownership. In addition to looking after the house, she began to help her mother-in-law in the production of jute items . As time passes , however, Haricha wanted to start her own business, to build something for herself and her family. Now after 10 years she has become a small businesswoman.

“My dream – she tells AsiaNews – has become a reality. My sorrows are gone and my hopes have been answered. Many of us are poor, but no one can blame us for this. Working and earning, we can change our lives .”

Margaret Peris, 57, has a similar story and was among the first to benefit from this project : “Without CJW it would have been impossible for me to become an active and self-sufficient member of society.” The woman lives in the village of Daripara (Gazipur district) and produces bags with her husband.

Like Haricha and Margaret thousands women are becoming self-reliant and empowered in the society. The producers are organized in cooperative groups. They are fully autonomous in managing group affairs with the assistance of an Education Team and follow the cooperative principles. At present, there are 220 co- operative groups with 4856 female and 160 male artisans in 16 districts of Bangladesh.