Women have played a key role in bringing about changes in improving health in Bangladesh. Not only through the “massive and unprecedented deployment of diverse cadres of mostly female front-line health workers reaching every household” but in women who were empowered to take control of their own health and reproduction. “Pro-poor and pro-women” programmes, such as education and micro-finance, have reduced inequalities.

Despite low spending on health, a weak health system and widespread poverty, the country has achieved great strides in life expectancy, vaccination rates, TB control and a child’s chances of surviving past the age of five, according to a series of focus papers published in The Lancet. 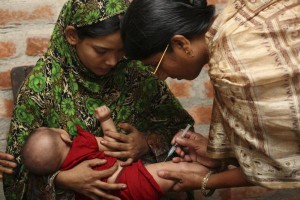 This paradox, in the eighth most populous country in the world, is due to specific health programmes that have focused on issues including gender equality, family planning, immunisation and diarrhoea treatment, the researchers said. And the wide use of health workers going out into communities has also been a positive factor.

A Mushtaque R Chowdhury, a professor of population and family health at BracUniversity said maternal mortality had dropped by 75% since 1980s and infant mortality has more than halved since 1990. Life expectancy in general had increased to 68.3 years “surpassing neighbouring India and Pakistan”, Chowdhury said.

Access to medicines, scaling up treatment for TB and improved access to primary care (though still problematic) are cited as the three biggest drivers of change. While attempts to increase access to essential drugs has usually been market-driven, another approach which involved using community health workers saw treatment completion rates rise from less than 50% in the 1990s to more than 90% now – one of the highest rates in the world.

Female health workers, recruited to deliver door-to-door family planning services, are behind a rapid fall in fertility from seven births per woman in 1971 to 2.3 in 2010. Contraceptive use also rose from 10% in 1970 to around 62%, which these authors credit with “undoubtedly contributing to the speed and magnitude of improvements in mortality, particularly in women … and a major shift in cause of death.”

But while successes in birthrate reduction and child mortality have been applauded and compared to lower levels of progress in similar developing countries, Bangladesh still suffers from other health problems including “persistent malnutrition” in children and mothers. Poorly governed health systems and regulation has also led to “endemic problems such as overuse and misuse of drugs”.

Professor Chowdhury, who is co-lead on the series, said the progress that Bangladesh had made over the last 40 years clearly countered the idea that “reducing poverty and increasing health resources were the key drivers of better population health”.

Instead, the system of programmes, health workers and community initiatives have helped drive changes in problem areas despite the problems in funding and management of the overall system. This pluralistic health system includes input from lots of people and organisations including the private sector and NGOs, which the researchers said, had “been encouraged to thrive and to experiment”.

Bangladesh’s war of independence in 1971 was brutal and bloody. But in its wake came development and rebuilding work. This, the researchers said, created the conditions that led to large-scale health changes.

But Bangladesh is changing still. And rapid urbanisation is a new issue for healthcare workers, which also splits problems between rural and urban populations. While rural women are more likely to be undernourished, those in urban areas are more likely to be overweight. Chronic non-communicable diseases are on the rise and the urban poor have been a particularly difficult group to reach, especially when it comes to accessing essential medicines.

Mass urbanisation, which has led to one-third of all city dwellers living in slums with no basic infrastructure, creates the right conditions for problems such as TB spread.

“Arguably the most daunting challenge is the health of poor people living in urban areas”, Chowdhury said. “In the past 40 years, the proportion of the population living in urban areas has risen from around 5% to 28%. This is projected to grow to more than 50% by 2050 – roughly 100m people – putting tremendous pressure on already inadequate water, sanitation, and primary health-care services.”

So the Bangladeshi paradox continues. And solving problems stemming from poverty in a country of 153m remains elusive. “The stark reality is that prevalence of malnutrition in Bangladesh is among the highest in the world,” said Abbas Bhuiya, from the International Centre for Diarrhoeal Disease Research in Dhaka – another co-author. “Nearly half of children have chronic malnutrition. Over a third the population (more than 47m) live below the poverty line, and income equality is widening.”

Although health services are available free to the poor, a poorly equipped public health system means a shortage of an estimated 800,000 nurses and doctors. And an expensive and unregulated private market pushes many further into poverty.

But this does not take away from the significant successes the country has made in a push towards universal health coverage, the researchers said, and it does not detract from what other countries can learn about overcoming health problems when the system itself may be down.