The second biggest religious festival of the Muslims, The holy Eid-ul-Azha, is going to be celebrated across the country tomorrow with due solemnity and religious fervor.

Eid-ul-Azha is celebrated on the 10th of Zilhajj month of the Hizri calendar as Hazrat Ibrahim (AS), on this day, some 4,500 years ago, offered to sacrifice his beloved son Hazrat Ismail (AS) who willingly submitted to the will of his father to please Allah. But the Almighty in His benign mercy spared Hazrat Ismail (AS) and instead sent a ram to be sacrificed.

To commemorate this historic event, the Muslims across the country will offer prayers in congregations and sacrifice animals in the name of Almighty Allah. They will offer munajat seeking divine blessings for peace, progress and prosperity of the country as well as welfare of the Muslim Ummah. 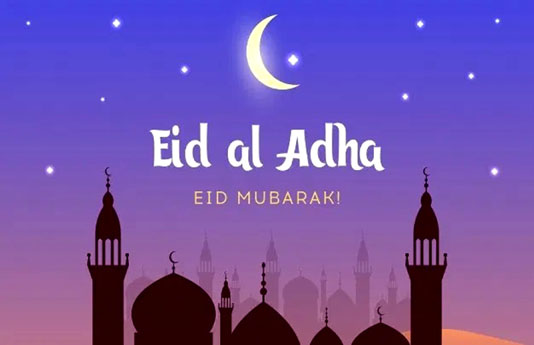 President M Abdul Hamid and Prime Minister Sheikh Hasina issued separate messages, greeting the Muslims in Bangladesh and all over the world on the occasion of the Eid-ul-Azha, reports BSS.

Besides, opposition leader in the parliament Begum Raushan Ershad also greeted the nation on the eve of the holy Eid-ul Azha festival.

Considering the COVID-19 pandemic throughout the world including Bangladesh, Muslims are set to celebrate the Eid-ul-Azha festival following strict health rules.

The festival appeared very unlikely to resemble that of previous years as many countries banned the traditional Eid congregations as part of anti-coronavirus measures.

Bangladesh authorities urged people to stay in their current abodes discouraging plans for larger family gatherings at their ancestral homes as part of the desperate measures to prevent COVID-19 spread.

Muslims around the world are celebrating the festival with millions under strict stay-at-home orders and many fearing renewed coronavirus outbreaks.

Meanwhile, a public notice by the Religious Affairs Ministry said that “Islam encourages performing Eid prayer at Eidgah or open ground. But considering the health safety, worshipers are being instructed to perform prayers at mosques, following social distancing. If necessary, more than one jamaat will be arranged at different time slots.

“As well as all the health guidelines must be followed by the devotees, failing which government authorities and police will take legal action,” according to the public notice.

Following are the health and safety guidelines one must adhere to for performing Eid prayer at mosques:

Mosques are not to use carpets on their floors. The floors themselves must be cleaned with antiseptic five times a day, following each prayer. Worshippers must bring their own prayer mats and caps.

Hand sanitizer or handwashing soap and water must be kept in front of the mosques so that everyone can wash their hands before entering. Everyone must wear masks inside the mosque.

Ablution must be performed before going to the mosque.

Worshippers standing in the same line must maintain a distance of at least three feet from each other.

Lines must not be formed in consecutive rows, but alternate rows.

Children, the elderly, the sick, and those engaged in the service of patients cannot participate in the congregation.

General guidelines of the health care department, local administration, and law enforcement agencies must be followed to ensure public safety.

Every year, the city corporations and district administrations organize central Eid prayer in all the districts of the country.

But this year, government authorities will not organize Eid prayers on open grounds following the decision.

Prime Minister Sheikh Hasina has already instructed not to organize Eid jamaat at Supreme Court premises, the main Eid congregation in the country. Similarly, Eid prayer at South Plaza of the National Parliament will also not be held this year due to the corona virus pandemic.

President Abdul Hamid will perform Eid prayers in a mosque inside Bangabhaban.

A total of six Eid congregations will be held at the National Baitul Mukarram Mosque celebrating the Eid-ul Azha on August 1.

The Eid Jamaat will not be held in the National Eidgah, adjacent to the High Court, and also in the historic Solakia Maidan.In the Dhaka University, the Eid Jamaat will be held at university central mosque – Masjidul Jamiya – at 8am.

The jamaat will be held maintaining social distance and health guidelines amid the emerging corona virus situation. Senior Imam and Kathib Dr Syed Muhammad Emdad Uddin will conduct the Jamaat.

Another Eid Jamaat also will be held at Dr Muhammad Shahidullah Hall Jame Mosque of the Dhaka University at 8am.

President Hamid will exchange Eid greetings with the cross sections of people, including eminent citizens and diplomats at his official Bangabhaban residence tomorrow.

Prime Minister Sheikh Hasina will also exchange greetings with the cross sections of people, including party leaders and workers, judges and foreign diplomats, at her official Ganabhaban residence tomorrow.

The premier will exchange Eid greetings with judges, the cabinet secretary, the chiefs of the three services, foreign diplomats, senior secretaries, secretaries and other civil and military officials from 11am at the same venue.

Organizers said adequate water supply and security arrangements have already been made at the Baitul Mukaram National Mosque to facilitate the Eid-ul-Azha prayers.

Adequate security measures have been taken for peaceful and smooth celebration of the holy Eid-ul-Azha. The law enforcement agencies were also asked to ensure smooth movement of vehicles on highways, waterways and train routes.

State-run Bangladesh Television and Bangladesh Betar as well as other TV channels and radio stations would broadcast special programmes on the occasion of the Eid-ul-Azha.

On the day, improved diets will be served to inmates of government hospitals, prisons, orphanages, safe homes and shelter centers. 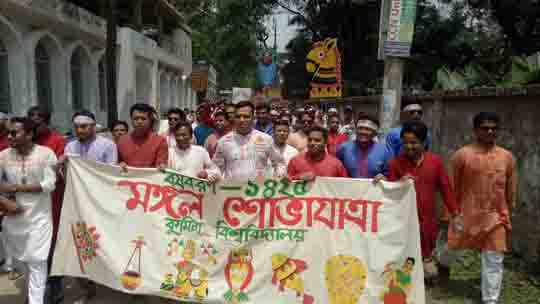