Falling prey to traffickers, Bangladeshis sailing to Malaysia are sold at four different destinations. It begins at Teknaf in Cox’s Bazar and ends at the Thai jungles bordering Malaysia. The victims say this last stop is the worst. If ransom is not paid, this is where their lives end. 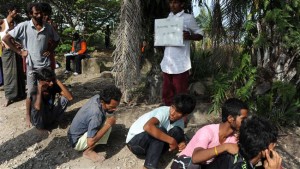 Many Bangladeshis and Myanmar’s Rohingyas who were freed from this last stop known as “jungle camp”, are now languishing in Thai jails. Details of the trafficking route, the changing of hands and the human trading, were revealed by several victims, local residents of Songkhla, as well as interpreters who work with the police during interrogations.

First phase: Trafficking of Bangladeshis begins in Teknaf, Cox’s Bazar. Field agents from all over bring people and load them onto small engine boats. The agents get Tk 10,000 per head. From the Teknaf coast they are taken to larger engine boats at sea. These wooden boats are a lot like fishing trawlers, and the traffickers call these ‘ships’.

If these ‘ships’ are near the coast of Bangladesh, it takes about four to six hours to reach them by the small boats. And if these are outside of Bangladesh’s waters, it takes a day and a night to reach. Each small boats carried 10 to 15 people. The people are made to lie on the bottom of the boats and are covered with fishing nets.

The bigger vessels carry 300 to 500 persons. These vessels do not start until they are full. They sometimes wait for even two months.

Sources said that during this long spell of time, the boats stay in Myanmar waters, having an “understanding” with the Myanmar navy. The Myanmar navy is paid 300 thousand kyats per boat, equivalent to Tk 21,000 in Bangladeshi currency. This money is paid to allow the boats to stay for 15 days, but they often stay up till two months.

Once on the big boats, there is no return. This is like a prison. The people are all cramped together. They are given a little rice and chillis to eat. Even the drinking water is inadequate. If anyone is sick, they are thrown into the sea. Arakan’s Zafar Ahmed, in the Songkhla detention camp, says two from their boat were thrown into the sea.

About four or five armed guards keep watch on the boats. If anyone argues, the guards just shoot them and fling them into the sea.

A Rohingya who worked with such a ring for some time and is now a police source in Songkhla, told this correspondent, it is not easy to control 500 people with just four or five guards. That is why one or two people are killed at the very beginning to keep the people scared.

Each boat carries people gathered by different rings. Each boat has a representative of the respective ring. They place the people in the boats, torture them once and then call their families for ransom.

Third phase: Once the boat is filled, the journey begins. It takes seven days and seven nights to reach the Thai coast. It anchors in the international waters. Then small boats take them ashore.

At the Thai coast these people are sold to the rings there, to ‘agents’, as the traffickers call them. The agents pay the big vessels 15,000 baht per head.

The agents arrange for the people to come ashore. The trafficked people are mostly taken to the hilly or jungle areas along the Thai coast Songkhla’s Rattphum, Sotun, Renong and Phuket. The Reyong coast is also used by traffickers, but less.

If the small boats berth at Sotun, it takes a two-hour walk to reach the road. A pickup van awaits them. From there the people are taken to Kwondon, a hilly area of Songkhla. They walk for a day and a night to the traffickers’ camp in Badam Besar jungle near the Malaysian border.

If the people are picked up at Rattaphum, it takes about four hours by car to reach the Kwondon jungle. Then they have to walk for a day and a night.

Fourth phase: The agents bring these people to Badam Besar where they sell them for 23 thousand baht per head (one baht equals about Tk 2.50). The buyers here are the main gangs. They are what the traffickers call, “mafia”. There are not many mafias. They come from Bangladesh, Myanmar and Thailand. These mafias together send the large vessels. The mid-level and field level agents work for them in four phases.

Management in the jungle camps is different. Per person 10 thousand baht is paid to keep the people in the camps. This is payment for the camp operators to accommodate, feed and guard the people and take them across the Malaysian border. The charge per person is 10 thousand bahts, whether they stay a day or a year.

The people bought by the mafia stay in different camps, along with a representative or two of the mafias. The mafia men torture the people and make them talk to their families, and then demand ransom.

The minimum ransom for a Rohingya is equivalent to 60 thousand bahts and for Bangladeshis, Tk 2 lac 20 thousand (Tk 220 thousand) to Tk 2 lac 80 thousand (Tk 280 thousand). The mafia people beat up the people who have been bought. They are not released until the ransom is extracted.

Agents lose nothing if anyone dies: The police source and resident of Badam Besar, a former member of a trafficking ring, said, if anyone manages to escape or is caught by the police, it is a loss. But if they die, it is not a loss because they don’t have to pay camp rent for the person. That is why the people are kept in the jungles until death.

There is not always space in the jungle camps. They are sometimes shifted. It is a lot like a mobile camp. The camp comprises more a less a roof made of thick polythene with makeshift wooden or bamboo walls. Sometimes it is just a polythene cover overhead. The same people are not always kept together in the camps. They often have to change camps. Women are kept is separate camps.

Many people die of torture or starvation in these camps. Many are unable to walk. They are carried from one camp to another in lungis. An official in the United National High Commissioner for Refugees (UNHCR) Bangkok office told Prothom Alo, they have found many who cannot walk. They suffer from Vitamin B deficiency and many die of fever.

Sabuj, a young man from Kishoreganj, spoke about life in the Songkhla camp. He said, a meal in the camp comprises two handfuls of boiled rice and cucumber served on polythene. Sometimes they add a chilli. They are given water twice a day, amounting to a glassful. They cannot wash their hands, face or gargle. They use the toilet in a hole dug in the jungle, surrounded by plastic. They have to wipe themselves clean with lumps of soil. They are beaten up. At night screams are heard from the women’s camps.

Sabuj said, “I cannot even begin to describe the horrors. This is hell, hell on earth.”

Separate management for each phase: While the trafficking is carried out in four phases, the mafias have a part in all the phases. They make money from every phase of the trafficking. Mohammed Anwar, president of Rohingya Society in Thailand working to provide relief to the rescued Arakan people, said, the network runs a lot like a group of companies.