Chief Executive Officer of Bangladesh International Arbitration Centre (BIAC) Mr. Muhammad A. (Rumee) Ali and Mr. Hugo H. Siblesz, Secretary General of The Permanent Court of Arbitration (PCA), The Hague, The Netherlands recently signed a Cooperation Agreement on behalf of their respective organizations. Her Excellency Ms. Leoni Margaretha Cuelenaere, Ambassador of the Kingdom of the Netherlands to Bangladesh on behalf of PCA exchanged the Agreement with BIAC’s CEO in the Le Meridien Hotel, Dhaka on Wednesday, 23 November, 2016. Former Chief Justice Md. Tafazzul Islam and Former Judge of the High Court Division Justice Awlad Ali, who are the members of PCA Arbitrator Panel for dealing International Arbitration, participated in Cooperation Agreement exchange ceremony. Mr. Mahbubur Rahman, Chairman, BIAC was also present at the event.

PCA is one of the renowned ADR institutions around the globe. It is the first permanent intergovernmental organization with 121 member states to provide a forum for the resolution of international disputes through arbitration and other peaceful means. The PCA was 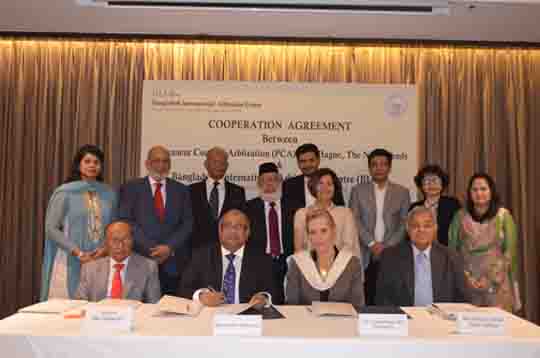 established by the Convention for the Settlement of International Disputes. Bangladesh is one of the member states of PCA who have acceded PCA’s 1907 convention on 26-02-2012. PCA established to facilitate arbitration and other forms of dispute resolution between states, the PCA has developed into a modern, multi-faceted arbitral institution that is now perfectly situated at the juncture between public and private international law to meet the rapidly evolving dispute resolution needs of the international community.

BIAC signed cooperation agreement with PCA to promote mutual assistance and the sharing of expertise. This agreement will provide a framework for cooperation between both the institutions involved in the peaceful settlement of international disputes. This agreement will enable BIAC and PCA to hold hearings and meetings in the facilities among themselves as well as to receive assistance with the arrangement of local support services for ADR related issues. This Cooperation with PCA will be a prestigious international recognition for BIAC.

Recently PCA designated BIAC to act as an appointing authority on a PCA case under the UNCITRAL Arbitration Rules in a case involving an Irish and Bangladeshi Party. The Authority to designate is reserved only by the Secretary General of PCA. PCA has been chosen BIAC for appointment of Arbitrators in this case. Arbitrators were appointed by BIAC, namely Barrister Akhter Imam, Former Attorney General Fida M. Kamal and the chairman of the tribunal – Justice Awlad Ali. The dispute is being resolved in five hearings within three months at BIAC. The Arbitration Tribunal has granted an award in October 2016.