Like most poor countries, Bangladesh needs a lot of energy to develop its economy, the cheaper the better. About 80 percent of its electricity now comes from natural gas. But with gas resources waning and an entrenched, inefficient subsidy system, the government has decided to promote coal instead. This shift comes with great risks: Coal power pollutes, and Bangladesh is at once the most densely populated country on earth and one of the most exposed to the effects of climate change. 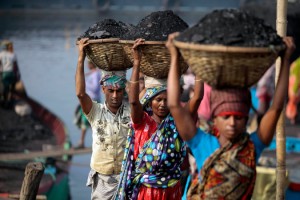 Under its 2010 master plan for developing the energy sector, the government hopes that by 2030, 50 percent of Bangladesh’s power will be generated by coal, up from about 2 percent now. (Bangladesh currently has one small plant, which runs on local coal.) It expects to accomplish this by building a dozen new coal-run electricity-generating plants, including a controversial one at Rampal, in the southwest of the country. That facility alone is expected to have a capacity of 1,320 megawatts, or about one-fifth of the country’s total current production of electricity.

But the Rampal plant, which is scheduled to be completed by 2016, will be located less than 10 miles north of the Unesco-listed Sundarbans, the largest mangrove forest in the world and the home to the largest population of Bengal tigers and to the endangered Irrawaddy River dolphin. The forest also acts as a buffer against the deadly cyclones that periodically funnel up the Bay of Bengal. With every storm, estimates Anu Mohammad, an economist at JahangirnagarUniversity, the mangroves save hundreds of thousands of lives.

Despite the Sudarbans’ designation as a World Heritage Site in 1997, waterways will be dredged through the forest to allow convoys of coal-bearing ships to reach the Rampal station. Half a million tons of toxic sludge will be emitted by the plant annually, according to a report by the nearby Khulna University, and it will flow downstream into the forest’s network of rivulets. Another problem, according to Mr. Anu, is that the Rampal project opens the way for opportunistic land grabs and the development of other polluting industrial activities in the area, including so-called ship breaking, the tearing apart of unwanted ships.

Electricity production has doubled over the past five years, but Bangladesh is struggling to keep up. Domestic production of natural gas falls about 200 billion cubic feet, or about 20 percent, short of demand for electricity-generation every year: After decades of selling the commodity to consumers and the industrial sector at exceptionally cheap subsidized rates, the country is running out of gas, and state-owned energy companies are operating at a loss.

In a merry-go-round of fiscal irresponsibility, state-owned banks hand out bad loans to insolvent companies, which only keeps the gas flowing cheaply and wastefully. All in all, the subsidies system cost the state approximately $3.4 billion in 2012, or nearly one-quarter of the budget, according to the Economist Intelligence Unit.

Bangladesh has gas reserves in the Bay of Bengal, but exploration has been slow. The state-owned exploration company doesn’t have the capacity or know-how to exploit those resources. And foreign multinationals don’t have the economic incentive: They wouldn’t recoup enough of their investment selling on the massively subsidized local market. At recent auctions, no companies bid on deep-sea blocks, and only two companies bid for the shallow-water blocks.

One result is that in recent years the country has had to import liquid fuels to power stopgap plants. This has increased the impoverished nation’s annual imports bill by around $2 billion, out of around $30 billion, according to Mohammad Tamim, a professor of engineering at the Bangladesh University of Engineering and Technology.

This is untenable in the long term, yet there are few alternatives. Nuclear power is touted, but for a country with little of the required infrastructure, that option seems fanciful. Although Bangladesh has great potential for renewables, policymakers haven’t put in the necessary investment or planning to developing them. This is partly because of cronyism and corruption, and vested interests that are eager to maintain fossil-fuel monopolies. It is also because of basic economics: The power generated by the renewables project on SandwipIsland, for example, is still so expensive that the plant runs at only 50 percent of its capacity because locals can’t afford to buy the electricity, even when it is discounted.

And so coal it is for now, despite the risks. Coal is plentiful worldwide, and its price is relatively stable. But since exploiting Bangladesh’s own reserves, for example in the north, would displace many people, the government has favored projects like Rampal: The area isn’t very densely populated, and the plant will run on coal imported from Australia or Indonesia.

Bangladesh seems to be caught in a bind. With demand for electricity growing by 10 percent a year, it will need to more than triple production, to over 30,000 megawatts by 2030. But that quantity isn’t so large; the United States produces more than five times as much from renewable sources alone. And there are better ways for Bangladesh to relieve the pressure than turning to coal.

Eventually the subsidy system should be entirely reformed. Not only is it inefficient; it doesn’t help the poorest: Only 50 percent of Bangladeshis are on the grid. But reforms will raise gas prices, and in order to avoid related shocks to the economy and possible social unrest, they will have to be undertaken slowly.

In the meantime, the gas grid itself should be made more efficient. Waste is rampant, and illegal connections to gas pipes are said to cost the government at least $30,000 a day. Revamping plants and cracking down on theft would reduce total gas bills, as well as the attached subsidy bills, even if the subsidy system remains in place.

Foreign governments pump almost $3 billion in development assistance into Bangladesh annually. Instead of financing coal plants (as Japan plans to do in Matarbari), or ineffectual projects to improve governance, donors should channel aid toward developing renewable energy. The World Bank and other foreign donors have funded projects for the sale and distribution of solar-power home systems, helping 320,000 rural households generate small quantities of electricity. But large-scale projects feeding into a national grid are needed; they would allow economies of scale. These projects could be developed with support from China, which is promoting renewables at home, perhaps in exchange for the access it covets to a deep-water port in the Bay of Bengal.

The government’s environmental-impact assessment for the Rampal coal plant assures that “the long-term concentration” of sulfur dioxide and nitrogen dioxide will not be significant because the pollutants “may periodically” be dispersed by the cyclones that hit the area. Indeed. But those emissions will only feed more winds that later disperse them, again and again — until much of the delta’s silty land is dispersed, too, by the angry rising tides of climate change.

Joseph Allchin, Opinion Blog at NY Times,  a journalist based in Dhaka.