Despite decades-old disputes over sharing of waters between Bangladesh and India, notably from the Teesta river, Dhaka hopes it can finalise a host of treaties with New Delhi.

“Modalities need to be found for the sharing of water resources, especially of common waters,” Bangladesh Prime Minister Sheikh Hasina told the BIMSTEC Summit in this Myanmar capital.

“As, for example, Bangladesh and India are sharing the waters of river Ganga with the signing of the 30-year-old Ganges Water Sharing Treaty, with others to follow soon,” she said at the summit, where the Indian side is being led by Prime Minister Manmohan Singh. 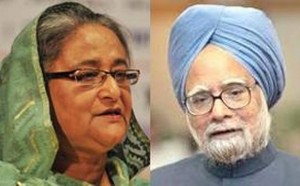 As many as 54 rivers are shared by India and Bangladesh and tensions continue between them despite a Joint River Commission seeking solutions since 1972.

The most recent dispute has been over Teesta river — which originates in Sikkim — and for which India was on the verge of signing a pact with Bangladesh, but had to withdraw after West Bengal Chief Minister Mamata Banerjee declined to give her nod.

“The recent experience of cross-border power sharing between Bangladesh and India would help finalise plans covering these efforts,” she said.

Besides India, Bangladesh and Myanmar, the BIMSTEc regional grouping comprises Nepal, Bhutan, Sri Lanka and Thailand, accounting for 21 percent of the global population and $2.5 trillion in GDP.