The Jahangirnagar University Science Club (JUSC) in collaboration with Mathematics Department of JU is  going to organize a Math Olympiad for the second time on November 20 on the campus.

Around 3:00 pm, Sahadat Hossain, president of JUSC disclosed the event at a press conference at the office of Jahangirnagar University Journalist Association (JUJA) on Tuesday.

A total of 1600 contesters from different school of Savar area would participate in the contest. 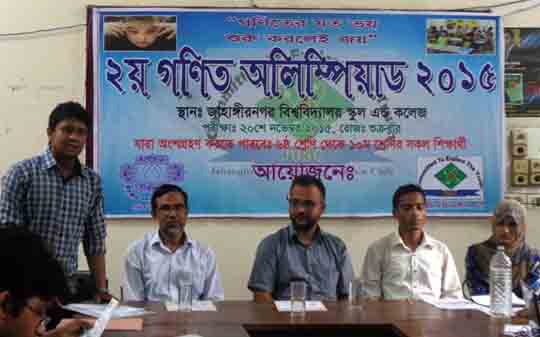 The test will be held at Jahangirnagar University School and Collage of the campus.

Contesters have to answer 30 marks in Multiple Choice Question (MCQ), 20 marks in IQ test and 20 marks in creative question in the contest.

The prize giving ceremony will be held on December 04 while Science and Technology acting Secretary Md Sirajul Haque Khan is expected to attend the programme.

A total of 50 students from five classes will be awarded as per 10 each class for their outstanding performance. The result will be published on November 30.