The area is under Zone-six of Rajuk. Rajuk on February 11/07/2019 sent a notice to Nur Salam to stop the construction work and remove his illegal building. People living in the adjacent homesteads around the risky 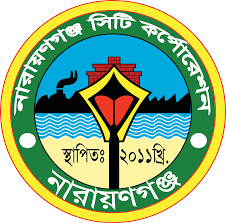 building continuously feel the danger of living there.  It is to mention that Nur Salam is the father of Councillor Badol, now one of the most top extortionists as per local media and police records.  He is the brother of Nur Hushen, a death convict of the widely talked-about Narayanganj seven-murder case.

Rajuk earlier on 18-03-2019 issued the first notice and asked Nur Salam to submit the documents of permission of construction and other related papers.  But getting no reply from Nur Salam, Rajuk issued 2nd notice on 22-05-2019 to submit the same within one month. After that Nur Salam submitted some fake documents that did not satisfy the Rajuk needs, therefore Rajuk sent the 3rd and final notice of eviction on 11 July of 2019.

When contacted, Nur Salam said, he filed a case regarding the distribution of this land among the owners in a Narayanganj court, and submitted that case documents in Rajuk. Regarding the Rajuk order not to continue the construction work, he remained silent.

Son of a retired Biman official of Rasulbag area, requested not to be named, informed the New Nation, once a baby-taxi driver Nur Salam and his family members are now the owners of vast property worth about Tk 50 crore or more in this area. They grabbed our land and others’, and thus now become the rich men, bought the votes in the election, and became a councilor.

Nur Salam alias Boba Dakat (Dumb Dacoit) and his son Shah Jalal Badal occupy others’ land in this area, he said.  The building built without the permission of Rajuk is also made on other’s land. That’s why they can’t show the proper documents including the legal ownership. Even the 7-storey building in which councilor Badal lives was also built without following building code. The land of this building is also disputed.

Locals said, Nur Salam proudly now says, I have managed Rajuk like that way my brother Nur Hushen managed Rab officials to kill Councilor Nazrul, the then panel Mayor of NCC in 2015.

Abu Taher, a madrasha teacher, whose land has also been occupied by Nur Salam, said Rajuk officials were firstly seen much active to evict this illegal building.  Then Rajuk set initiatives for two times to make the eviction drive in this area but failed due to not getting police forces. He informed when Rajuk’s Building Inspector Shahin was transferred, the eviction drive was stopped mysteriously. At that time some other illegal constructions including a market were said to be evicted.

In the meantime, the year-long pandemic hazard almost stops all the office work.  However, Authorized Officer of Zone Six, Sarder Mahbubur Rahman could not be reached to get his opinion.  Present Inspector Masud Rana informed that the file was sent to the legal wing of Rajuk. When asked, ‘what is the cause of sending the file to the legal wing when the building is ordered to evict earlier’, he declined to comment.

Nurul Amin, a retired government employee, said he along with his four other colleagues bought a piece of land of four Katha at Muktinagr in 2011. They built there a makeshift market and named it ‘Kismot Market’ thinking it a good fortune for them to do some business after retirement.  But unfortunately, the land was adjacent to the home of Nur Salam and that was the cause of misery to Nurul Amin and his fellow men. Nur Salam claimed the land, tried to occupy and threatened the men to leave the land.

However, Hanif Mia, a vegetable vendor of Kismot Market, said that they then managed Nur Salam giving him ten lakh Taka and thought the matter was solved. But they were wrong. Nur Salam started the construction work of a 5-storey building on his land but expanded the balcony and roof by 3 feet over the land of Abu Taher gong in 2019. Nur Salam threatened Hanif and others to sell the land to him as he could make his building on the whole plot with market beneath.

Abu Taher gong informed the councilor Badal and other persons of the locality to get justice. But they failed as no one dares to say anything to Nur Salam, the father of Councillor Badol, brother of Nur Hushen. Badal and his father Nur Salam now suspect Abu Taher and threaten him for Rajuk notice and other offices against them.