Migrant workers sent $6.77 billion home to Bangladesh in July-December, down 8.41% from the same time a year ago. For the first time in recent memory, Bangladesh has experienced a decline in remittances in the first half of the fiscal year. 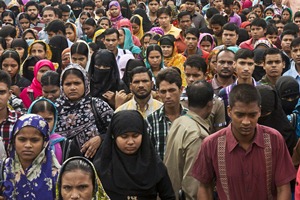 The standard refrain appears to be that the flow of remittance has declined because the stock of Bangladeshi migrants abroad is not growing like it used to. This is because of two reasons. First, Bangladesh is failing to send more workers abroad to traditional markets and exploring new markets. Only 450,000 migrants managed oversees jobs in 2013, down by more than 33% from 680,000 in 2012. Second, the number of migrant workers returning to Bangladesh has also increased because the government could not resolve problems related to the legal status of Bangladeshi migrant labors in Saudi Arabia, the United Arab Emirates and Kuwait through diplomatic channels. Unfortunately, there is no reliable time series on the annual number of migrant returnees from abroad.

Is that the full story?  I doubt it although it is generally assumed that the current migrant workers are sending money home as per their maximum capacities and have little capacity to increase the flow.

Average earnings may have declined because of increased unemployment and/or decreased wages of illegal migrants in GCC countries in particular as the authorities tightened enforcement of regulation against illegal migrants.

The propensity to remit may also have declined because of the appreciation of taka against US dollar in 2013 and increase in transaction costs due to incessant political turmoil. Taka appreciation has stronger effects on remittances motivated by the desire to invest. By reducing the taka paid per unit of dollar, appreciation raises the taka prices of the assets the migrant workers wish to buy in Bangladesh, thus reducing the asset demand and hence the amount that would have been remitted to buy those assets. Political turmoil affects remittance transaction costs as well as the ability to remit by disrupting the smooth functioning of the banking system.

Detailed data to quantify the contribution of each of the factors noted above is unfortunately not available. Anecdotally, it appears their contribution to the decline may be nontrivial.

Focusing economic diplomacy to resolve the legal problems Bangladeshi migrant workers are facing abroad so as to prevent their premature return home, helping unemployed migrant workers abroad find decent jobs, improving the skill composition of new migrants, ensuring the competitiveness of the exchange rate, and ring fencing remittance transactions from the impact of political turmoil will help stem the decline in remittances experienced in the first half of FY14.