In northern Bangladesh, a 17km-long industrial conveyor belt carries in limestone from a mine on the other side of the border with India. It feeds a cement-making factory, which ships its output down a river to the capital, Dhaka. There the stone—mined in India and processed in the Bangladeshi hinterland—becomes, block by block, part of one of the fastest-growing cities in the world.

Your correspondent had always wanted to see this conveyor belt, not least to find out if a customs officer is there to man it. But those plans were swiftly pushed to the side by another, even more tantalising idea. Apparently, back in 1994, North Korea’s late dictator, Kim Jong Il, deployed his own country’s miners to a different bit of northern Bangladesh—to help to develop a mine there.

This is a mine for granite, not limestone, and no one in Dhaka seemed to know much about it. It is, after all, closer to the Bhutanese capital of Thimphu, or to the Tibetan plateau proper for that matter, than it is to big-city Bangladesh. And so I set out, to have a look. 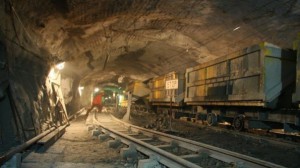 In the industrial belt north of Dhaka young women walk to work carrying metal lunch boxes by their sides. It is five o’clock in the morning and some of the factory floors are already lighted for the day’s shift. Lorries are out in full force, seizing a window of opportunity that opened the previous evening, with the end of a three-day-long national strike called by one of the country’s feuding political dynasties. Election banners featuring well-nourished local strongmen standing alongside the country’s two women leaders, Sheikh Hasina of the Awami League and Khaleda Zia of the Bangladesh Nationalist Party (BNP), line the way from city centre to the industrial suburbs to countryside. (Pictures of the men from whom the women inherited their parties are equally prominent, as are portraits of their sons, who have been waiting away their lives in exile.) Soon the high-rises give way to rice paddy.

Two buses have collided up ahead and the gridlock we meet forces our car into a lengthy detour, via villages. It is too foggy to catch a glimpse of the Jamuna river, the main branch of the Brahmaputra, where we cross it. And so the vast, watery expanse that divides Bangladesh into two nearly equal halves, on its way to the Bay of Bengal, passes unnoticed beneath our wheels. The bridge, much like the electoral system, is in constant need of repair. The road ahead runs north, alongside the mighty river, which can be as wide as 12km here and shifts constantly. In theory this is a two-lane highway, with one lane each for traffic in both directions, meant to accommodate pedestrians, rickshaws, cars, coaches and lorries. In practice the road is so busy and the travelling speeds so varied that the drivers of overtaking vehicles are on a sort of continuous collision course, playing a head-on game of chicken. Usually the worst possible outcome is avoided.

The road leads into the heartland of the BNP’s Zia dynasty, named for one of two personality cults that have been ruling Bangladesh since independence from Pakistan in 1971. Ziaur Rahman, the late husband of Khaleda Zia and a former president, was born in a village nearby. It is a conservative area. There are plenty of men about, some busy bringing goods to market, others idle. But the few women who are to be seen in public are striding intently from one enclosed space to another.

Pictures of Tarique Rahman, Mrs Zia’s firstborn son and heir-apparent, are pasted to electricity posts. WikiLeaked cables reveal that American diplomats thought of the younger Mr Rahman as “a symbol of kleptocratic government and violent politics in Bangladesh”. In some of the posters he is shown in the pose of Rodin’s “Thinker”, if the Thinker wore sunglasses.

Somewhere north of Bogra town the car seems to cross an invisible line. Moving goods over it is an expensive proposition, as from here on there is no cheap natural gas, Bangladesh’s prime source of energy, only imported fuel. These are the borderlands with India—one half of Bangladesh’s districts border on its giant, encircling neighbour—and they are almost without exception the poorest.

The mine is still two hours north, past Hili, a trading post at one of the border crossings with India. Farther north is the fief of a former Bangladeshi dictator, Mohammad Ershad. At 83-years-old, he remains enormously popular in northern Bangladesh; his party still has 27 seats in parliament. Mr Ershad may be the world’s only politician to carry the distinction of having allocated parliamentary seats to his wife, his mistress and his mistresses’ husband—all at the same time.

There were well-meaning bureaucrats in Dhaka who had tried but failed to equip us with written permission to see the mine. But we feel reassured when one of Mr Ershad’s local fixers, riding along in our car, offers to make a phone call on our behalf. The man who takes his phone call, a union leader who waits for us outside the mining complex, is saluted by the guards there. Once he climbs aboard, the metal gates swing wide open before us.

This is a coal mine, the only major one in the country. As we arrive, a troop of local miners emerges from the shaft. Most of the 1,100 Bangladeshi miners who work here earn $6 per day—several times the going local wage. There are another 300 Chinese nationals working at the site too. Big red Chinese characters painted on the winding tower above the mineshaft betray the origin of much of the hardware. The union leader who is acting as our host is careful not to disclose how many tonnes of coal his Chinese-run mine, the Barapukuria, actually produces. We know that it has struggled to turn a profit since its inception.

Dhaka is now 12 hours behind us, nearly 400km to the south. As the sun sinks low towards the tropical horizon, its light has to travel through a thick and humid slice of sky. Soon it will have turned a dull red.

At last we come into sight of the Maddhapara granite mine. A North Korean contractor with a funny name, the Korea South-South Co-operation Corporation, began developing this operation in 1994. Most of Bangladesh is an alluvial basin and almost totally devoid of natural rock formations. For stone it relies almost entirely on imports, with an annual demand running to 7m tonnes; it is one of the world’s biggest importers of both limestone and clinker. The case for digging at Maddhapara looks strong. But with some $200m already sunk into this mine, as well as nearly two decades’ toil, there is not much to show for it.

Mohammad Moinuddin has been the mine’s managing director since January. He explains their slow progress vaguely, by saying that the North Koreans were unable to develop the mine properly (“there were a lot of constraints”). At present the mine produces 1,250 tonnes in a shift, less than a quarter of its designed production capacity of 5,500 tonnes.

But “where are the North Koreans?”, we want to know. “The last three North Koreans, including the translator, left yesterday,” answers Mr Moinuddin. We are flabbergasted, by what seems an almost impossibly bit of bad luck in our timing.

Asked how much the men from overseas earned, Mr Moinuddin says they did not have “personal” salaries. Instead their compensation was sent to the office of the North Korean firm in Dhaka. “I don’t know what they paid the workers here. [The workers] were passing their lives in poor conditions”.

The mine itself cannot be visited, he explains a bit tensely, because this is a crucial phase of transition. He knows just as well as any bureaucrat in Dhaka that he will be running the mine only for as long as Sheikh Hasina and her father, Sheikh Mujibur Rahman, are there on the wall behind him, looking over his shoulder from their framed portraits. During tea he directs the conversation to the mine’s future. One hundred Belarusians are due to arrive in January. The new contractor, a joint venture between a Bangladeshi investor called Germania Corporation Limited and a firm based in Belarus, JSC Trest Shakhtos Petsstroy, has promised to boost the mine’s output massively. To that end, the government of Bangladesh is paying $172m towards the mine’s development over a six-year period. The idea is to lift 9.2m tonnes of hard rock out of the ground in that timeframe.

At the tea stall in front of the mine, the local labourers are confident that things will improve with the arrival of the Belarusians. Word has it that they are a lot more experienced than the North Koreans.

The deal that led to the North Koreans giving way to the Belarusians came on the heels of a three-day state visit that Sheikh Hasina and a 41-member delegation made to Belarus. Together with North Korea, the Belarus of Europe’s last dictator, Alyaksandr Lukashenka, accounts for just 0.2% of Bangladesh’s total trade. The Bangladesh government says there is great potential for investment and trade with Russia’s landlocked and benighted friend to the west. An adviser in the opposition says that Belarus is serving as a depository for the commissions the current government made on a series of arms and nuclear deals it has signed with Russia, which are worth billions of dollars in total.

An office assistant at the mine shares the tea stall’s sense of confidence about a brighter future. But not everybody can be happy about last Tuesday’s withdrawal. As the assistant points out matter-of-factly, the arrival of the North Koreans nearly 20 years ago created a local demand for dog meat. Labourers and villagers would kill local dogs, which are not ordinarily on the menu in Bangladesh, and bring them to the mine. The price for a Bengali dog delivered to the doorstep of the North Koreans’ living quarters varied between 1,000 and 2,000 takas ($13 to $26), depending on the size of the dog.

The man who seems most relaxed up here is the mine’s geologist. He introduces himself as Engineer Asaduzzaman. His title reveals the source of his remarkable staying power. An engineer’s expertise will be useful here no matter who runs the show. This one has already outlasted a dozen managing directors and the North Koreans, while Bangladesh’s leading ladies swapped power in Dhaka three times. He does not seem bothered by the imminent arrival of the Belarusians, nor by the prospect of yet another changeover in the delta.