A faction of pro-Awami League teachers of Shahjalal University of Science and Technology (SUST) fasted for four hours demanding immediate removal of its Vice Chancellor Professor Aminul Haque Bhuyan from his post mentioning him as a ineligible.

The teachers arranged the program under the banner of “Mohan Muktijuddher Chetonay Udbuddho Shikkhakgon” at around 10:00am to 1:00pm on 03 September, 2015. Treasurer of the university Professor Elias Uddin Biswas requested the agitated teachers to break the fast at 1:00pm and they ended fasting. 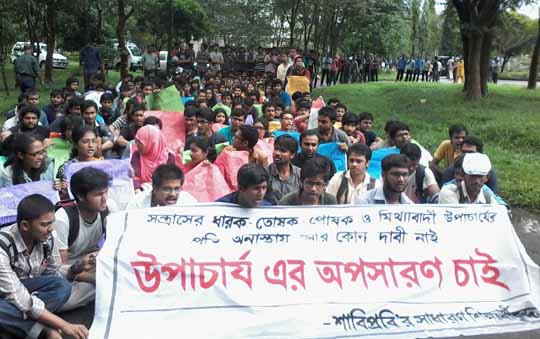 They also protested the attack on them by Bangladesh Chhatra League (BCL) men on last Sunday and demanded punishment of them.

On the other hand, several hundred students from different department observed sit-in for   three hours and gave an ultimatum 48 hours to resign VC from his post.

Later the teachers said to journalists that, they would observe work abstention on Sunday if their demand will not meet by this time.

Convener of the teacher’s panel Professor Syed Shamsul Alam said, the VC has been lying though media blaming the teachers that, the agitated teachers assaulted him on Sunday morning.

But the country men can clearly see from videos of CC TV that the VC assaulted Professor Mohammad Younus, he said.

The Office Head Forum of the university observed two hours work abstention on Thursday from 9:00am to 11:00am protesting the attack on teachers on Sunday.

However, the several hundred students from different department under the banner of “General Student” brought out a procession from Central Library Building demanding immediate removal of VC and paraded main streets at campus and ended at in front of VC office where the teachers fasting.

The students observed a sit-in program from 11:00am to 1:00pm and gave a 48-hour ultimatum to remove VC from his post. Otherwise they would go tougher program.

Mentioning VC as a lier and abetter, the students said, he (VC) had no right to hold the post.

When connected, Proctor Professor Qumruzzaman Chowdhury said, action would be taken against the students those who brought out procession and observed sit-in at campus without proctorial permission.

It is mentionable that, The tension erupted on the SUST campus on April 13 when 19 teachers from its physics department and geography and environment department went to hold a talk with the VC over space allocation between the departments.

On the face of the protest, VC went on two-month leave on 23 April showing his personal cause following the movement of the teachers in demand of his resignation. After joining on 22 June teachers start the movement again.