Bangladesh’s traditional country boats are on the brink of extinction as after about four decades since independence, Bangladesh has developed a first class road infrastructure linking almost all rural villages under every union parishad, the lowest tier of local government in Bangladesh.

The country, which was set target to become a middle income nation by the year 2021, has attached the utmost priority in its infrastructure development. 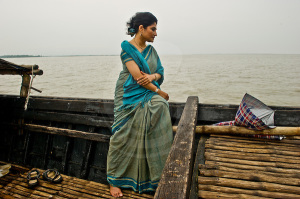 Now Prime Minister Sheikh Hasina’s government and her state machine appear particularly confident that they would be able to make Bangladesh a medium income country by the stipulated period and a developed country by 2041.

The government, to keep pace with its target, is developing infrastructure nationwide, including the road networks quickly. In the country such arteries are developing very quickly.

In Bangladesh during the monsoon season all farm lands used to be submerged under six to seven feet of water and the villagers could not move from one village to another without using a boat.

The country boats were made of wood and in different sizes and patterns, and sold at different prices depending on the size and quality of wood.

The days of traveling from one village to another without using a boat during the monsoon season was once unimaginable, but those days are gone as most Bangladeshi villages have been linked by roads, allowing people to move freely on foot or in vehicles.

The farmers can take their agricultural products to markets in towns and cities and get better prices.

One villager, Anwar Hossain, of the Banchharampur sub-district of Brahmanbaria, told Xinhua that he was pleased at the development of road networks in the country.

He said he had to share a boat with four other students to go school during the monsoon season.

Now there’s no need for such boats and Hossain sends his boy to school by paddle rickshaw.

Motorized boats have taken the place of country boats in some cases. During the monsoon season, the villagers use motorized boats only to go to a market far away from their village and other villagers share the boat.

The country boats are not entirely extinct. In the low lying Haor (large bodies of water) areas of northeastern Sylhet and Sunamganj districts where the development of road networks are not rapid enough, country boats are still in use.