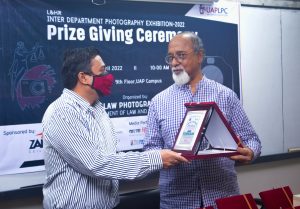 With immense pride and honour, the UAP Law Photography Club concluded the Prize Giving Ceremony of the L&HR Inter-Department Photo Exhibition 2022 this Wednesday at the University of Asia Pacific.

The UAP Law Photography Club is one of the most active and vigorous clubs at the University of Asia Pacific. The Club started its journey two and a half years ago on October 24, 2019, with 16 members, and now the Club consists of eligible 34 members under the charge of a dynamic club convener, Ms Nazia Wahab, Assistant Professor, Department of Law and Human Rights, University of Asia Pacific. Every semester, new club members are recruited depending on their eligibility. So far, the total number of club members is 400. The club had a pretty smooth run even during the pandemic because of the keen club members. The Club believes every person is creative and the eyes can capture those creative expressions and express them to the world through photography.

The UAP Law Photography Club (UAPLPC) started a photo exhibition in the UAP Plaza on the 18th of April 2022 for the Inter-Department Photography Exhibition 2022, just like it does every semester, during which the Prize Giving Ceremony is held on the 20th of April. Before that, the club started collecting photographs of the UAP students from April 10 to April 16.

This time, the club received 322 photographs in total from the departments, including Law, Pharmacy, Civil, CSE, EEE, English, Architecture, BBA, and also from EMBA, LLM. Of those, the top 20 photos were displayed in the exhibition and were certificated. 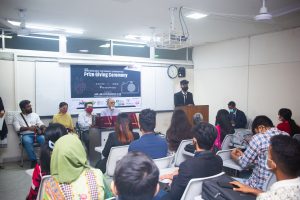 acific. He expressed his gratitude to the UAPLPC for putting up such a wonderful program, and he thanked them as well. He encouraged the students, and at the conclusion of his speech, he revealed the identity of the participant, who was taken aback. He was there when the names of the participants in the top four for the Photo Exhibition 2022 were revealed.

The special guest was Dr.Chowdhury Ishraq Ahmed Siddiky, Head of Department, Department of Law and Human Rights, UAP, and Deputy Director, SAILS. He added that photography is an art form, and students with an interest in photography may study it. He continued by stating that this organisation is one of the most active not just in the law department, but also across the university. Dr. Ishraq said he was impressed with the club’s work and that he thought one of the club’s members would one day be a photographer for the UAPLPC.

Nazia Wahab, Assistant Professor, Department of Law and Human Rights, University of Asia Pacific, Convener, UAPLPC was present at the awarding event. Ms Wahab expressed her appreciation to the UAPLPC for organising such an excellent event. She congratulated each student on their choice to join the club. According to Ms Wahab, developing one’s soft skills is necessary to increase one’s competency.

At the very beginning Shahriar Islam Shovon, President of UAPLPC, delivered his welcoming speech in which he said that because of the corona situation, the university campus remains closed, which is why we are unable to accommodate them on the UAP Campus. This is our honest effort to make them feel special, despite the difficult circumstances. UAPLPC is one of the most prominent clubs at the University of Asia Pacific, ranking among the other clubs. UAPLPC began its journey in 2019 with the goal of establishing a photographer’s community inside the Department of Law and Human Rights. This club has organised a number of workshops, a photo contest and exhibition, an inter-semester photo contest, and an inter-department photo exhibition in such a short period of time that, even during this lockdown, this club is securely ensuring all club operations online. Each Friday, they broadcast a live session dubbed “Friday Photo Adda” to help students recover from mental weariness. At the conclusion of the event, Shahriar Islam Shovon, President of UAPLPC, expressed gratitude for everyone’s involvement.

Ms Wahab delivered her concluding remarks at the end of the session and praised all of the students for their participation. The Inter-Department Photography Exhibition: 2022 was sponsored by Shai Tea, Zabeen Fan, and University Press Limited. The event was hosted by Mohammad Asif (Program Coordinator, Contest & Exhibition).